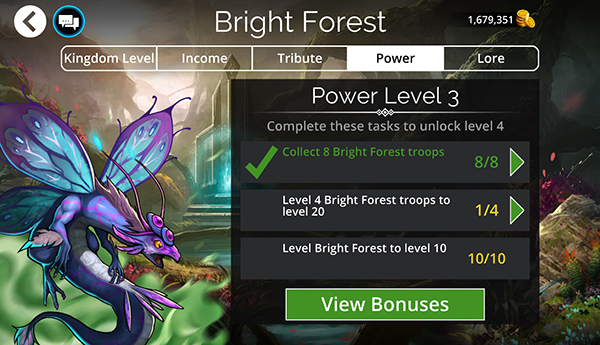 * Kingdom Power has been reworked to be clearer to understand how to progress to the next kingdom rank
* In the Kingdom Power menu are 3 Tasks, related to the kingdom. Completing all 3 tasks will give a rank of kingdom power
* The game has an indicator on the world map when kingdom power has been earned, and will play an animation showing the unlocked rank
* Any existing Kingdom Power a player might have will be carried over to the new system (basically if you had 5 stars, you’ll still have 5 stars, for example) 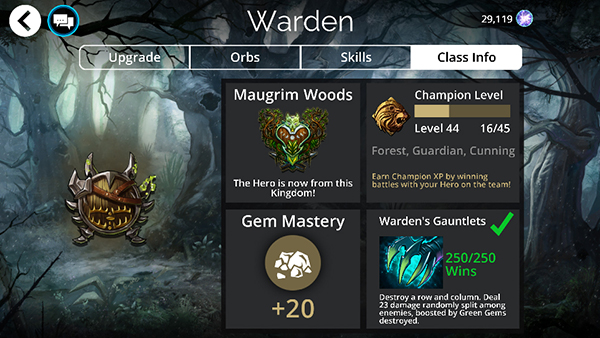 * Once a Hero Class is unlocked, and set as the current Class, players can start to earn Champion levels, by using the hero in a battle. Champion XP is only earned if hero is used in battle, and for the current class equipped with the hero.
* Quests, Challenges & Explores give 1 XP to Champion Levels, all other battles (PVP, Arena & Events like Raid Boss) will give 2 XP
* At milestone Champion Levels, the player will unlock the ability to choose a Talent from 1 of 3 Talent Trees of a Hero Class. Milestone levels are 1, 5, 10, 20, 40, 70, and 100
* Perks have been removed from classes with the introduction of Talent Trees and Weapon levelling. However, the class weapon is still unlocked by winning 250 victories with the hero class (the Hero does not have to be part of the team for these victories to count towards the weapon)
* Classes now grant the troop type bonus when the class is unlocked 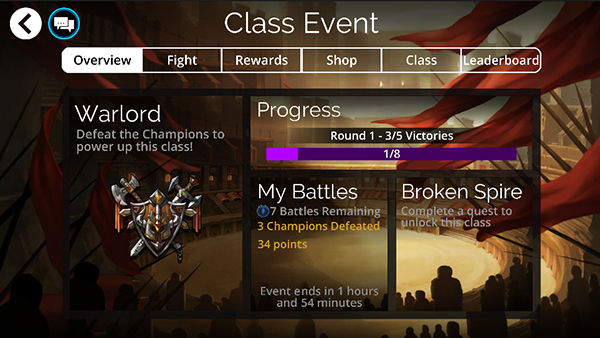 * Events that allow you to unlock a Class and earn rewards to aid in hero class progress have been added to the game
* Class Events will be run for both new classes when they are released (3-day weekend events) and older existing hero classes (1-day events during the week)
* Class Events allow players who have not yet unlocked the event’s class, to play the quest to unlock it, even if they have yet to unlock the kingdom or complete the storyline there beforehand
* Class Events contain 5 Champions a player must defeat (in any order), with bonus rewards for Gold, Gem and Champion XP if they are all defeated. Once defeated, these Champions can be fought again, at increasing difficulty, to unlock larger rewards. This can be done up to 8 times
* Class Events require players to build a team with troop and kingdom restrictions based on the Hero class
* Class Events have a leaderboard allowing players to compete for rewards, with points earned from Champion Battles
* Each Champion battles gives a set number of points, with points deducted for any troops you lose during the battle
* Class Events require Sigils to play. 8 Sigils are given for free in 1-day events, with 4-per-day in the 3-day variations. Valravens may drop more Sigils once you’re in battle.
* Class Events contain a shop with tiers that gives rewards to help players with unlocking progression of the Hero Class, including extra Champion XP, Souls and Traitstones for unlocking Hero Class traits 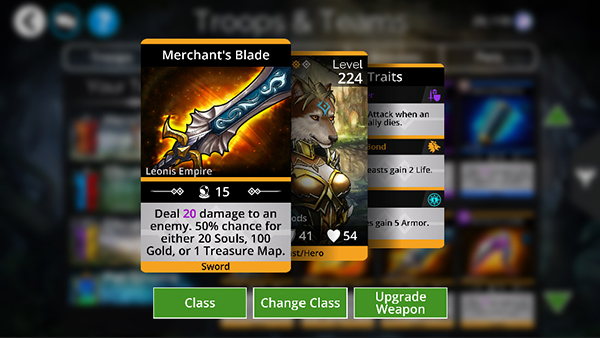 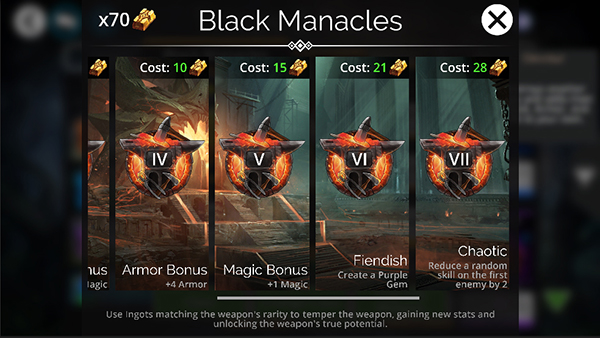 * Weapons also can now be levelled; the max level will depend of the rarity of the Weapon. Common weapons can reach Max Level 5, while Mythic weapons can reach max level 10
* Levelling can be done from the Weapon tab part of the Troop menu
* Levelling weapons require a new currency, ingots
* Ingots common in 6 rarities, Common, Rare, Ultra-Rare, Epic, Legendary, Mythic
* Weapons require ingots of matching rarity, so a rare weapon uses rare ingots; and mythic weapons use mythic ingots
* Ingots can be gained from the following places:

* Weapon level is displayed as +3 in front of the weapon’s name
* At levels 1 – 5 the weapon gives skill points based on the weapon’s type
* At levels 6 – 10 the weapon unlocks different affixes – affixes are extra effects that will trigger when the weapon casts its spell
* Affixes count as spell for status effects like Faerie Fire, etc.
* Weapons’ Home Kingdoms don’t affect or add to team bonuses

* The Daily Task system (that was only on console before) now appears on PC/Mobile
* Some Daily Tasks can now be reset, but only once per day
* Pet Rescue Events. will now display remaining time for the event in the menu
* Improved Game asset downloads
* Can now reset your account password from in-game (This feature will be deactived when the update launches and be activated in the future)
* There is a new tutorial for Account Linking – to help players protect their accounts from being lost, we have tutorial in game that appears after level 20 to suggest setting up account linking.

Good news! Our achievements are available on PS4, XB1, Steam and Google Play.

* Fixed issues connecting to chat
* Fixed issue with Burning status blocking troop stats
* Fixed some of the issues which caused players to be sometimes denied an extra turn, may still see some occurrences though
* Fixed issue where Doomskull explosions would sometimes deny a 4/5 match by exploding those gems
* Fixed an issue where Progress percentage would not show correctly when linking account
* Other minor bug fixes and improvements