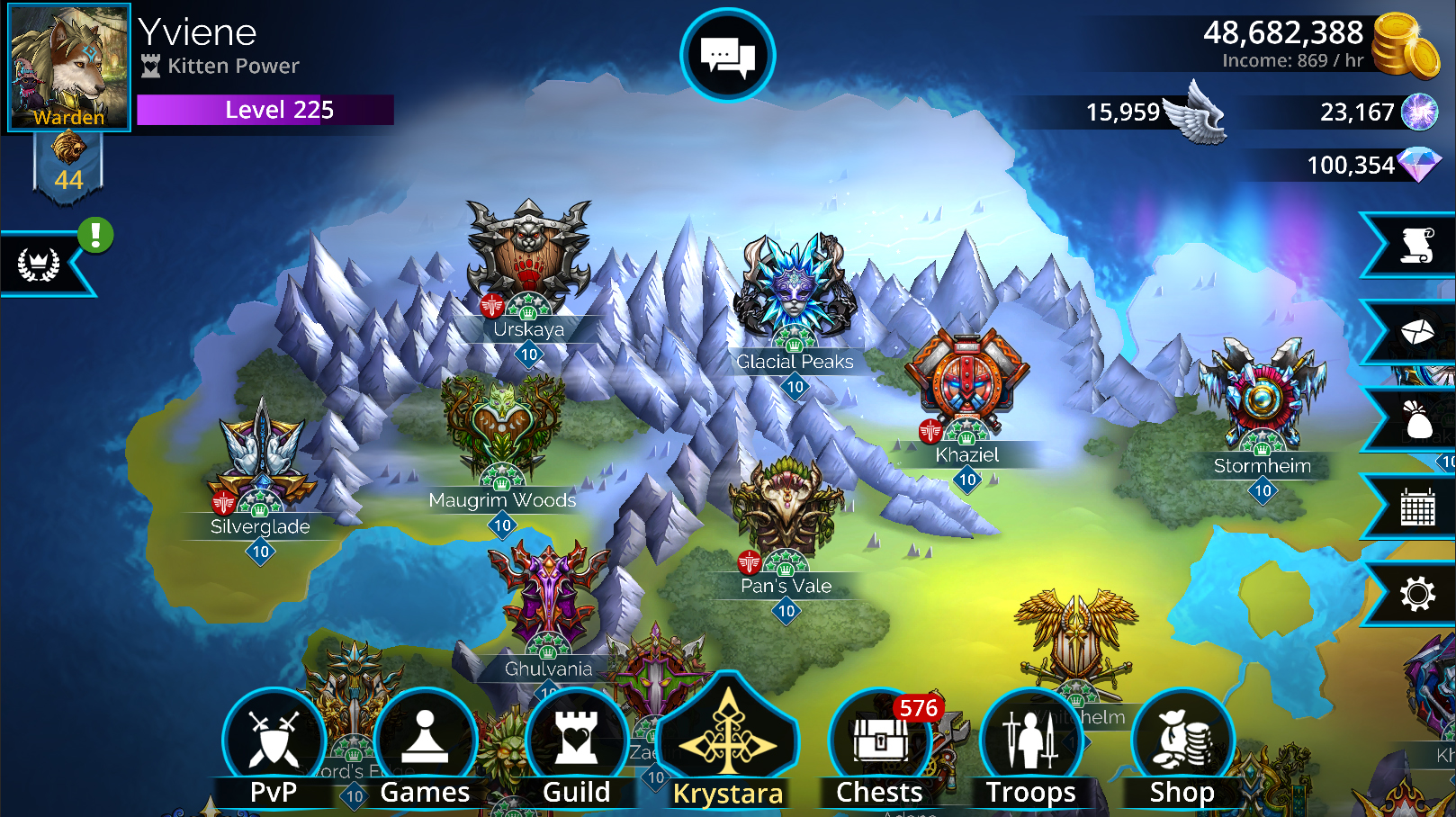 * The Krystara Map has gained improvements, including:

*Players will be able to change the quality level for maps in the Setting > Graphics menu, with the Water quality being separate from the regular graphics quality
*To allow players to easily navigate between Krystara and the Underworld (see below), the HUD has been updated to include a central button, which has been added to the bottom of the HUD
*This button will also flash when a Tribute is available to collect
*Tapping this button will navigate you between the 2 maps (once you have unlocked the Underworld – see below for more details)
*The button also displays which map you are currently located on
*The Hero Menu is now accessed by tapping on your portrait in the top left corner 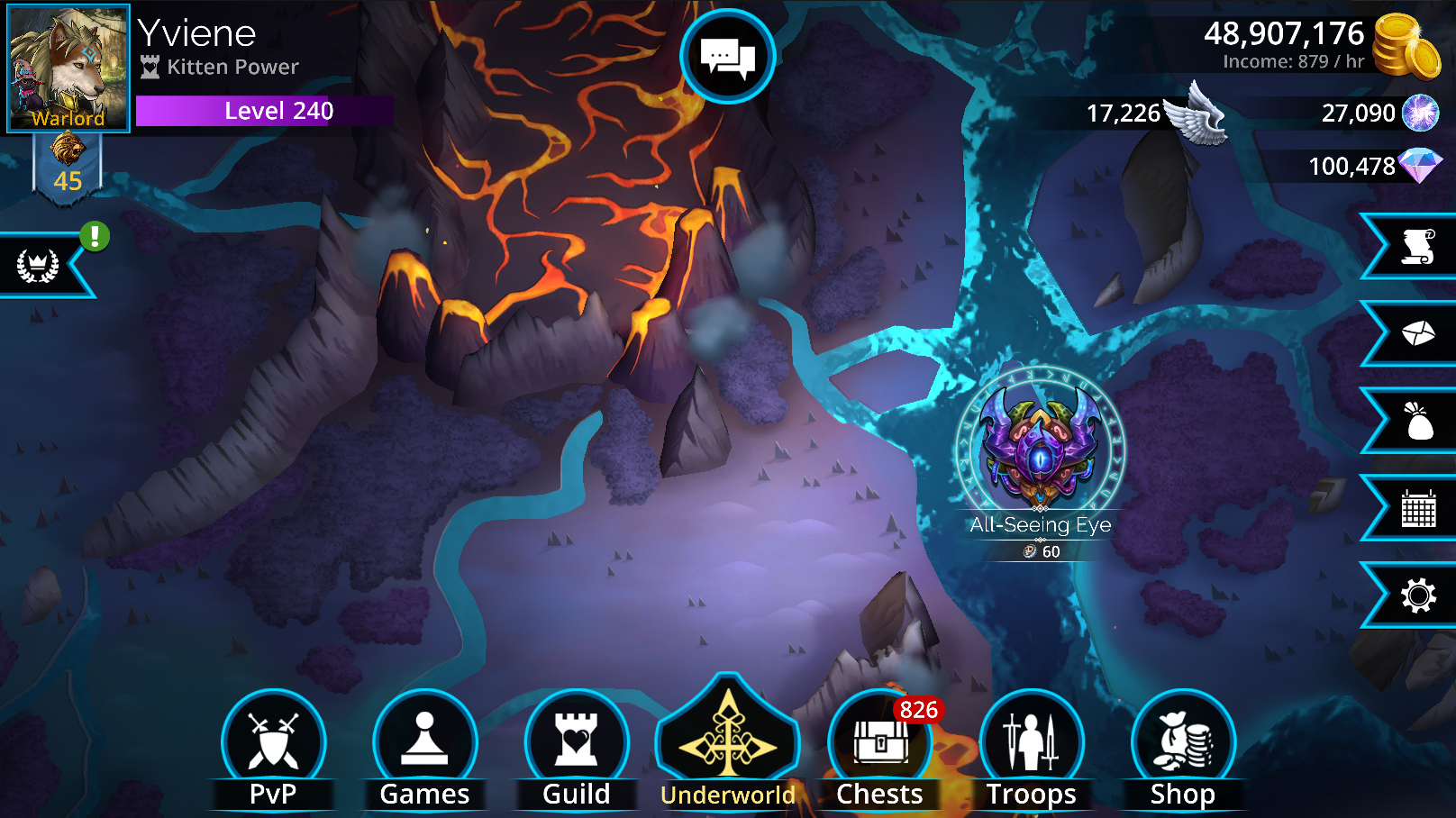 * We have added a whole new map to explore – the Underworld
* The Underworld Map also shares the same visual improvements as the Krystara map (i.e. 3D Elements + Particle Effects)
* Access to the Underworld is unlocked once a player completes the Sin of Maraj storyline
* Unlike the Krystara Map, which requires you to unlock kingdoms next to each other to progress around the map, Factions in the Underworld can be unlocked in any order (once they have been released) 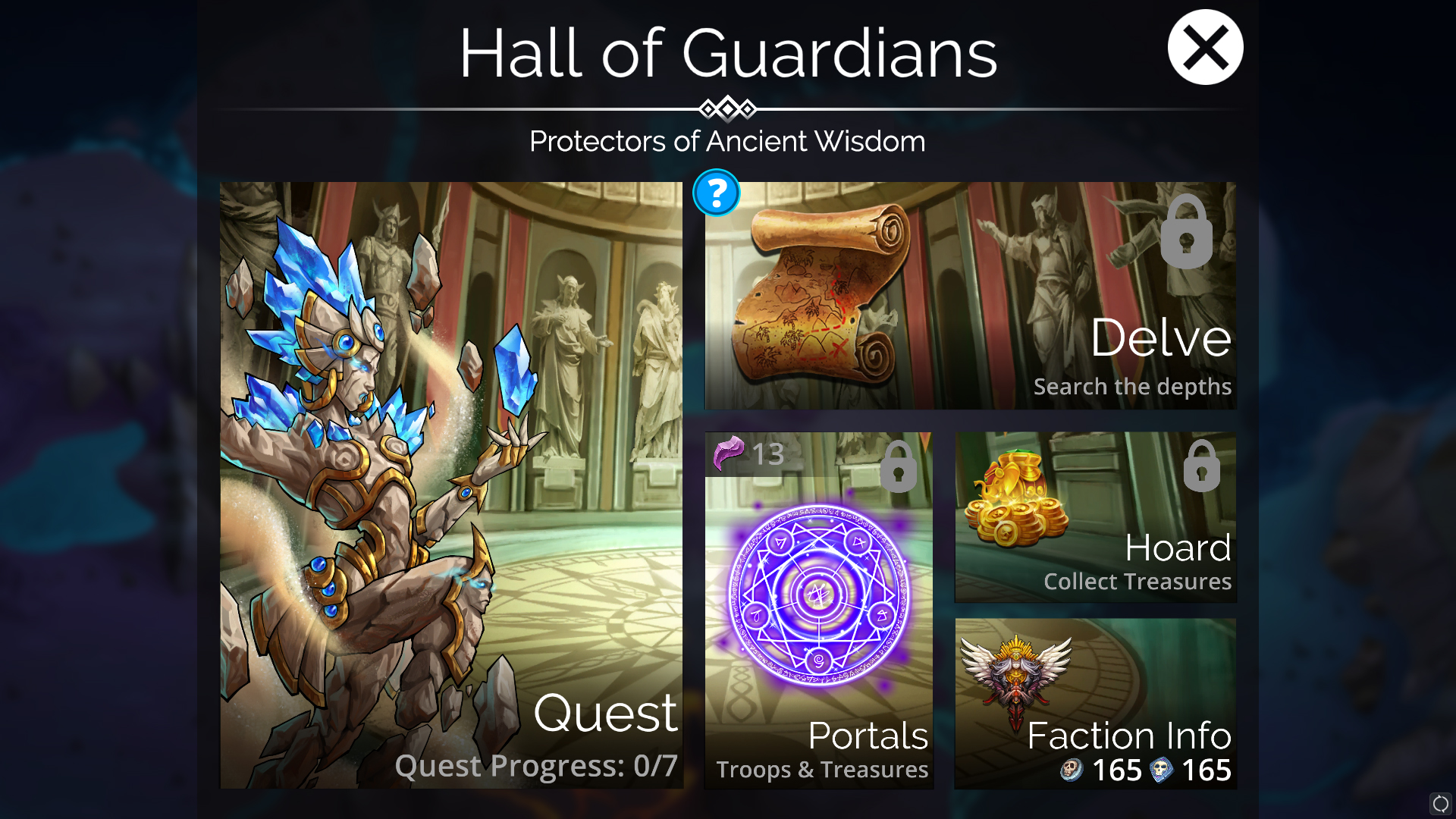 * Factions in the Underworld are like a smaller version of Kingdoms, but are unique to the Underworld
* Each Faction has new Troops, Weapons, Pets, a Banner, Quests and a Delve (more on Delves further below)
* Factions unlock in a similar manner to Kingdoms, by paying a Gold cost
* The main difference between Factions and Kingdoms are as follows:

* Faction Quests are shorter than their Kingdom counterparts, but once completed will allow access to Delves (similar to the way a Kingdom Questline allows access to Explore Mode)
* 2 Factions will be available with the release of 4.0, the All-Seeing Eye and the Hall of Guardians
* New factions will be released every 4-5 weeks
* Factions are also linked to the Kingdoms of Krystara, meaning that collecting and levelling the troops from a Faction will count towards their sister Kingdom’s Progress 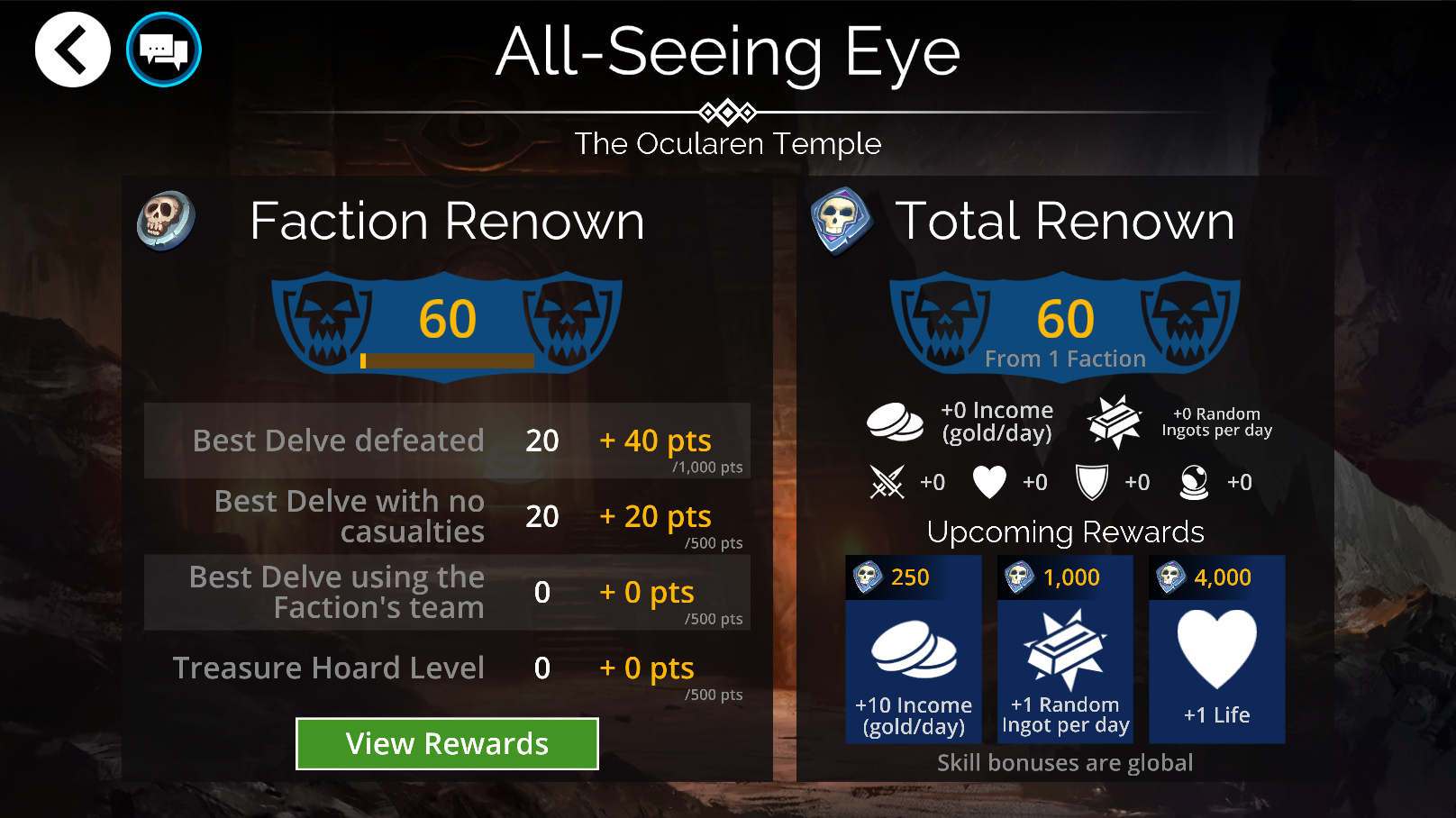 * Renown is a new rating tied to Factions
* There are 2 types of Renown:

* Each Faction gives Faction Renown for:

* Each Faction’s Renown is capped at 2500 Renown Points
* Faction Renown gives consumable rewards at various milestones, but also give access to the Faction Pet at higher Renown (Faction Pets cannot be earned from Pet Gnomes)
* Underworld Renown will also give rewards at various milestones, many of which are permanent bonuses
* Underworld Renown is only capped by the number of Factions unlocked (2500 x the number of Factions) 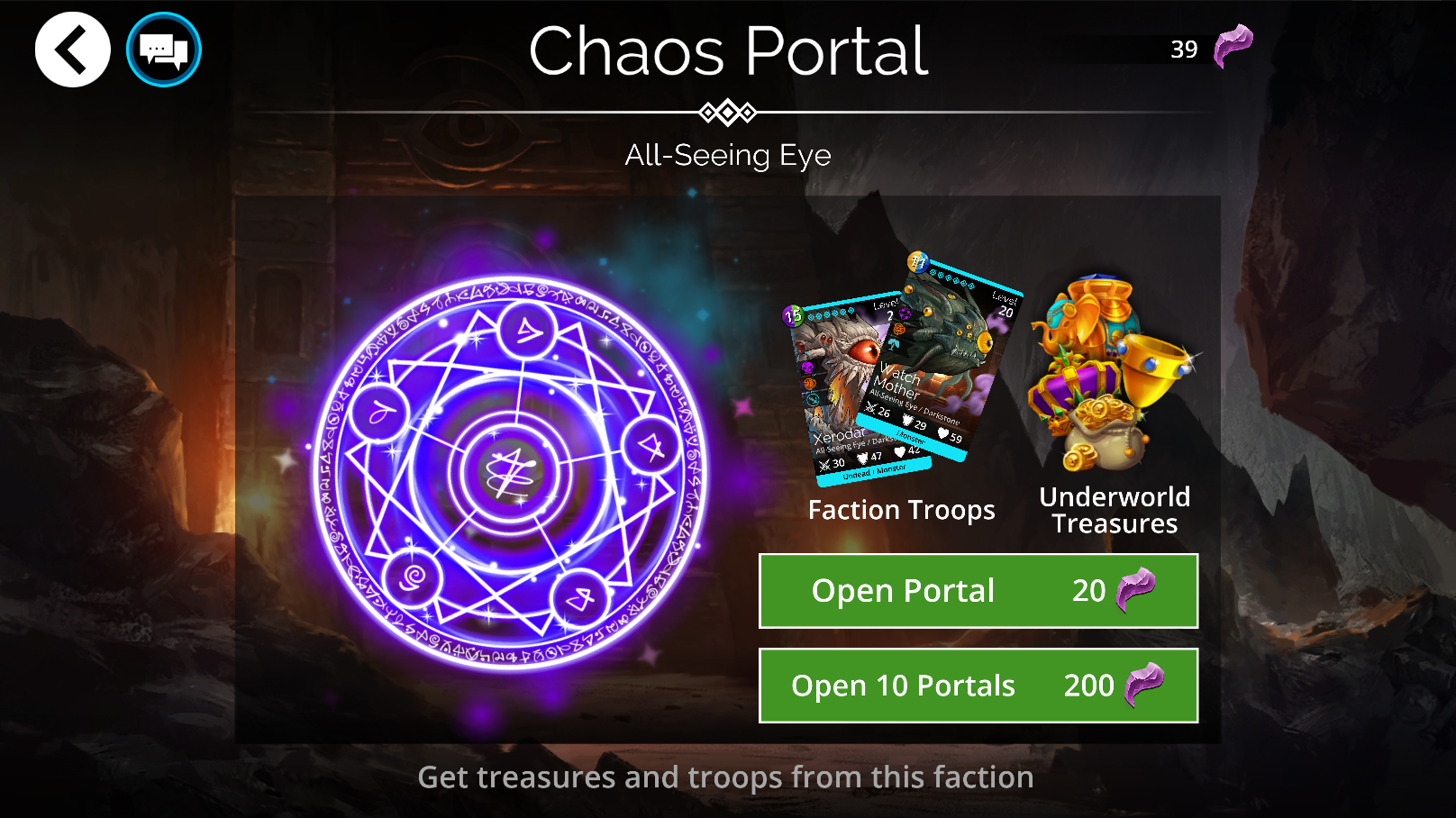 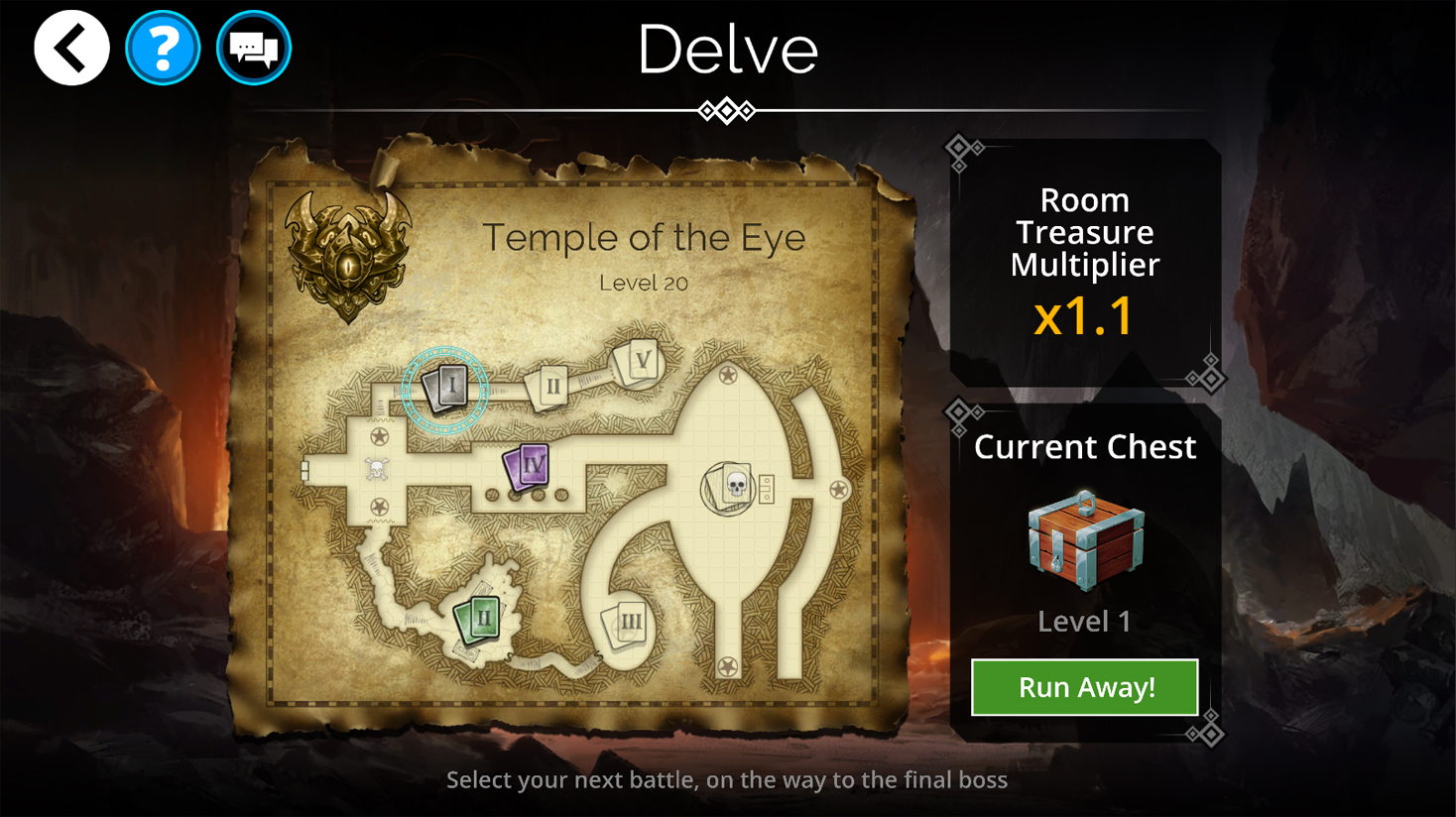 * Delves are a series of battles in a Lair, typically 3-9 battles depending on the player’s choices for a short or long experience
* Players do not need to complete all Delve battles in one sitting (allowing players to take a break in the middle of a Delve and come back to finish it later)
* Delves must be completed using a single team, and any troops killed will not be available in future battles in that single run through the Lair
* Factions Delves put team restrictions based on the 2 main colors of the Faction (which can also be seen of the Faction’s banner), so a Green/ Brown Faction would allow players to create a team with any troop with Brown OR any troop with Green (e.g. Brown/Yellow is acceptable, Green/Blue is acceptable, Green/Brown is acceptable, but Yellow/Purple is not). This ensures a wide variety of troops are available for each Delve Team.
* Delves have a reward chest that upgrades as players play through the Delve
* Delve Chests drop: Chaos Shards, Mythic/Legendary Ingots, Souls, Gold & Glory (depending of the level of the Delve chest when it is collected)
* Players may only attempt 3 Delves total per Day (so the 3 Delves are shared between all Factions)
* The starting level for all Delves is Level 20 – when players first unlock a Faction, this is the only Delve that can be attempted
* The Maximum Delve level is 500
* After a Delve has been completed, players will unlock a Delve 10 levels higher (up to the maximum of 500)
* Players always have the option of playing the highest Delve they’ve completed, a Delve 10 levels lower (unless they are on L20), and a Delve 10 levels higher (unless they are on 500)
* Once a Delve is selected energy is used (you get 3 energy per day)
* Delve levels are not shared so when unlocking a new Faction, you will need to start back at level 20 again and then level up through the different difficulties
* Each Dungeon contains 8-10 battles which are called Rooms, Only the Starting Room and Boss Room in a Delve with be the same, with the other 6 Rooms being randomly chosen 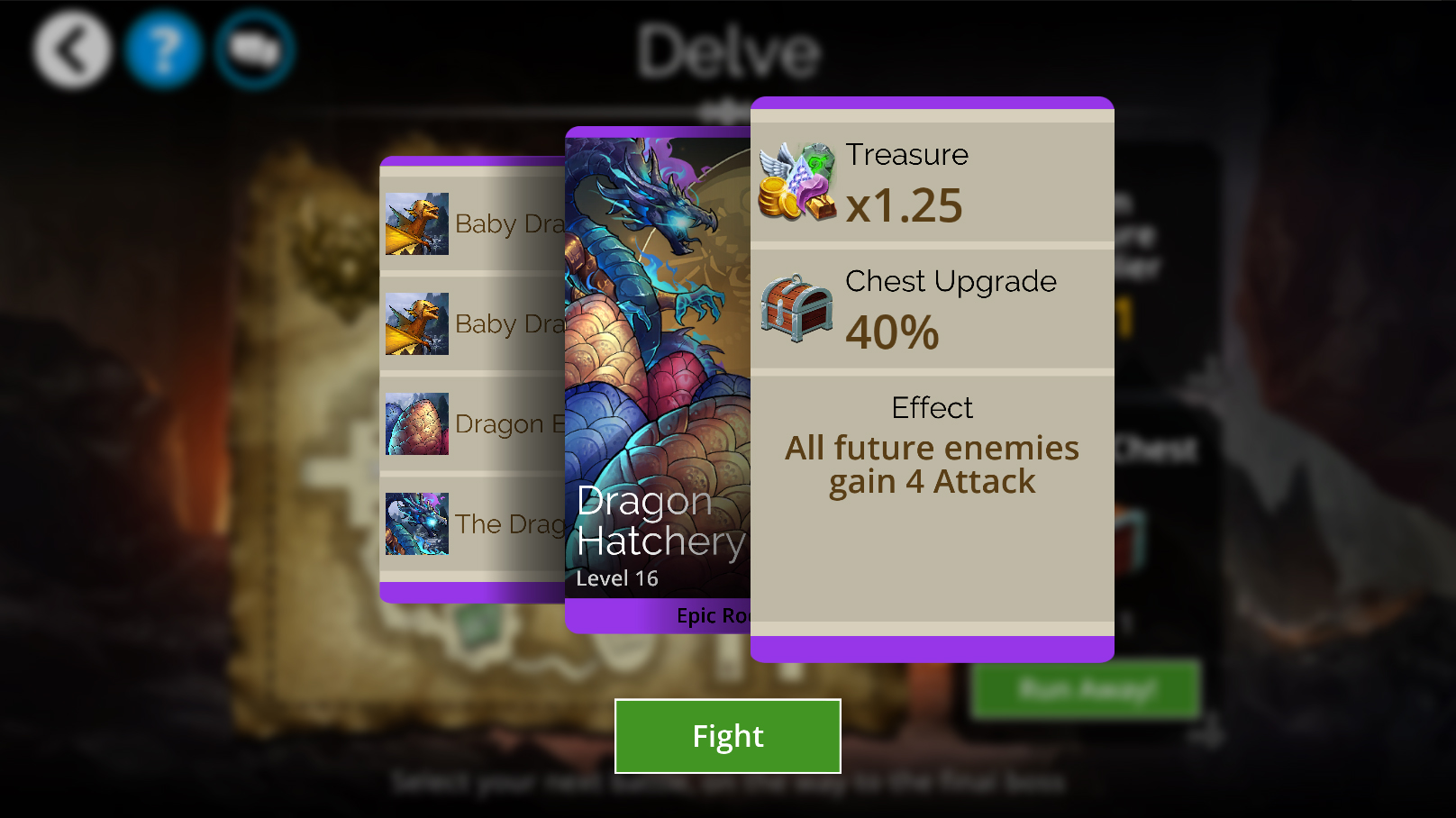 * Rooms have the following data:

* Excluding Starting Rooms and Boss Rooms, there are 34 random Rooms for players to encounter (more will be added in future updates)
* Players start with no Delve chest and will need to defeat the first Room to earn a level 1 Delve chest
* Players are not required defeat all the battles in a Delve and can just run up to the Boss Room and ignore any extra rooms if they choose to. The bonus of running more rooms is that your Delve Chest & Treasure Multipliers will increase.
* Retreating from a battle will be counted as a loss, marking the Room as completed and will end the Delve
* Attempting Delves of higher level than your last completed level will give a higher multiplier (x2) than replaying Delves of the same level (x1) or lower level (x0.5)
* When players lose a battle or chose to Run away, they will get to keep whatever treasure they have found so far, including the Delve Chest 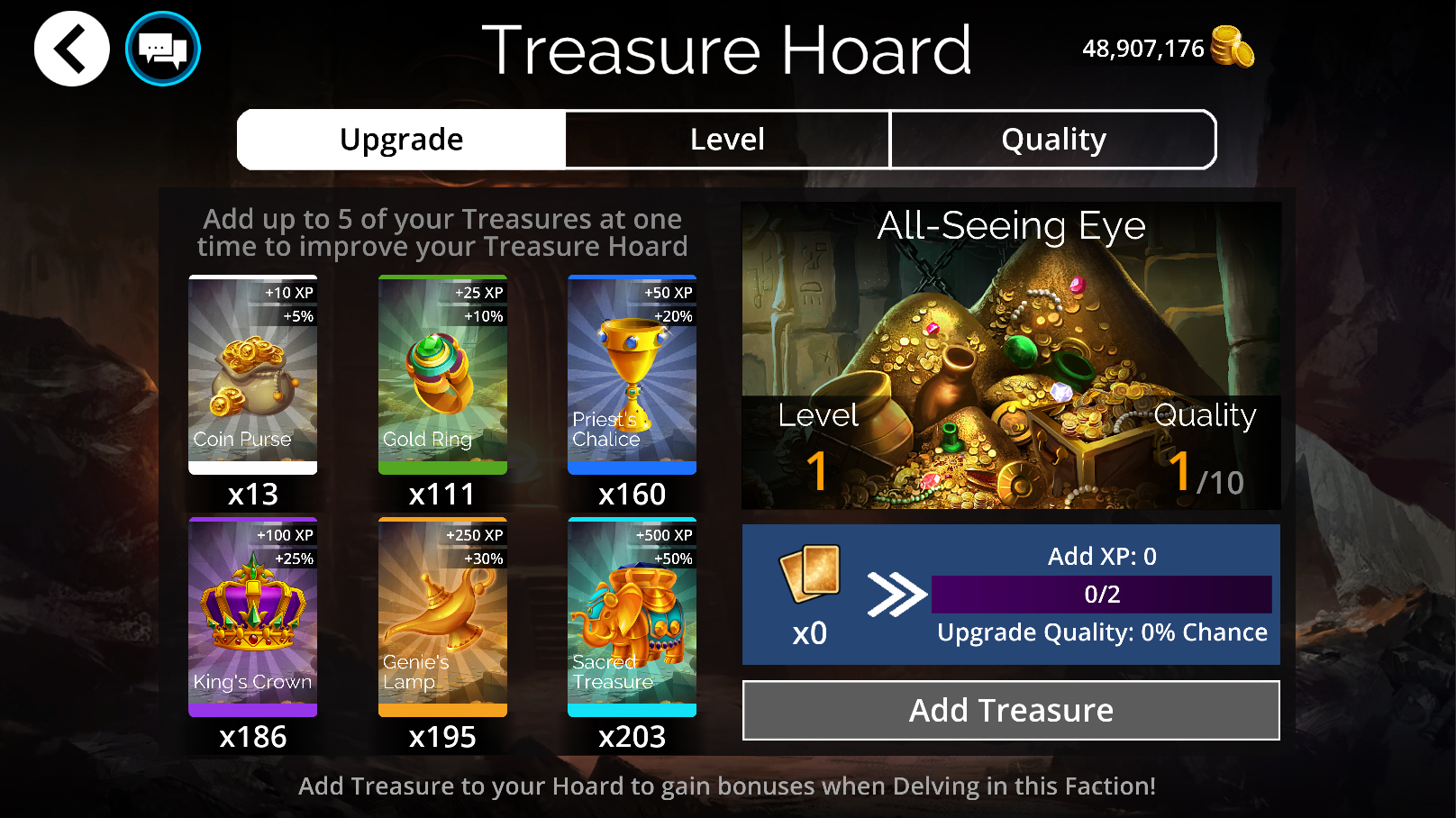 * Each Faction’s Treasure Hoard is upgraded using Treasures, which can be gained from Chaos Portals, and Gold
* There are two upgrades to your Treasure Hoard:

* There are 2 types of Delve events:

* Both events give bonus rewards & the opportunity to target that faction’s troops for collection
* Players start with, and gain, 3 Sigils per day for the event
* Completed Delves earns points which give bonus Chaos Shards as Rewards (along with Gold, Souls, Ingots, Diamonds, Vault Keys & Orbs)
* Event store will give:

* Valravens can be discovered during the event but are more rare than other events due to the fact that each Delve is up to 10 battles!
* Rooms in a Delve will be worth Points, which are multiplied by your current treasure multiplier (100 points per room, 200 points for the boss room)

We originally decreased mana gained from 100% to 70% back in 2015, due to the amount of mana gain from the spells was outscaling any other means to gain mana in the game and causing troops to be able to chain their spells.

In the past few months, as Magic has continued to scale higher and higher, this same behaviour has reappeared, with some explosion spells being able to power up mythic troops in a single cast (from 0 mana). As such we have reviewed the mana gain from exploders and after a long experimental time, decided to reduce the mana gain down to 50%. Mana gain from any gem cascade after an explosion will still get 100% of the mana (and it turns out that is often where half of your mana comes from).

With Doomstorm, we found that once triggered the number of doomskulls dropping would heavily tip the game in the favour whoever was winning, with little chance for their opponent to counter it. We’ve decided to tone it down a bit, so it’s not quite as deadly and allows some room for opponents to come back.

Celestasia
* Gem created increased from 8 to 9

Scorpius
* No longer a one-time only spell

Voice of Orpheus
* Base spell dmg increased from 6 to 8

* Guild Seals will now display in the Inventory screen of the Hero Menu with the other collectible resources
* A new Gnome, the Soul Gnome, will now start appearing in PVP, Explore, and Quests

New Shop Items
* We have added 3 new items to the Shop
* Path to Power I & II will give Ingots over a set number of days. You will be able to find them in the Offers menu
* The Weapon Upgrade Pack will give Epic Ingots and Souls

Stone Block
* The stone block appears on boards in the Underworld, at the start of each battle in pre-defined positions (normally along edges)
* Each Faction has a unique block pattern that appears in each of its quests, delves and delve events
* Blocks can be exploded but may not be moved or matched

New Pets
The following pets can now be rescued from Pet Gnomes:

These Pets will give bonuses to each Gem Mastery (similar to Snow Bunny).
The Community designed Pet Dragonkitty, will also be made available in the coming weeks after 4.0 releases.

We have new achievements available on PS4, XB1, Steam and Google Play.