* Tower of Doom is a guild-focused event, encouraging guilds to work as a team to advance up the leaderboard or progress through the Tower
* Each level in the tower has 4 rooms to battle, and a final “Boss Room” where a Doom troop awaits
* Dooms are a new troop introduced for Tower of Doom, and have their own troop type: Doom
* Unlike Delves, there is no persistence or team/troop loss, which means that any troops killed in battle, will be useable again in the next battle
* In order to unlock the Doom’s Room (the final room) in a level of the tower, players will need to locate an Unlock Scroll, which is hidden within one of the first 4 rooms
* Once a Doom is defeated, the player will advance to the next floor in the tower (players will not be able to go back to previous floors once they defeat the Doom)
* As the player progresses through the Tower, each Floor will get more difficult
* Each Tower of Doom will be focused on a specific color. Teams allowed into the tower will be restricted to this color, and the Ultimate Doom located on the 25th floor will also be that color.
* After players reach and defeat the 25th level of the tower, they can continue to climb higher up the Tower, with the floor’s enemies, and Ultimate Doom increasing in difficulty
* Ultimate Dooms will be slightly harder to battle than their regular versions
* There are 6 different Dooms (and 6 different Ultimate Dooms): 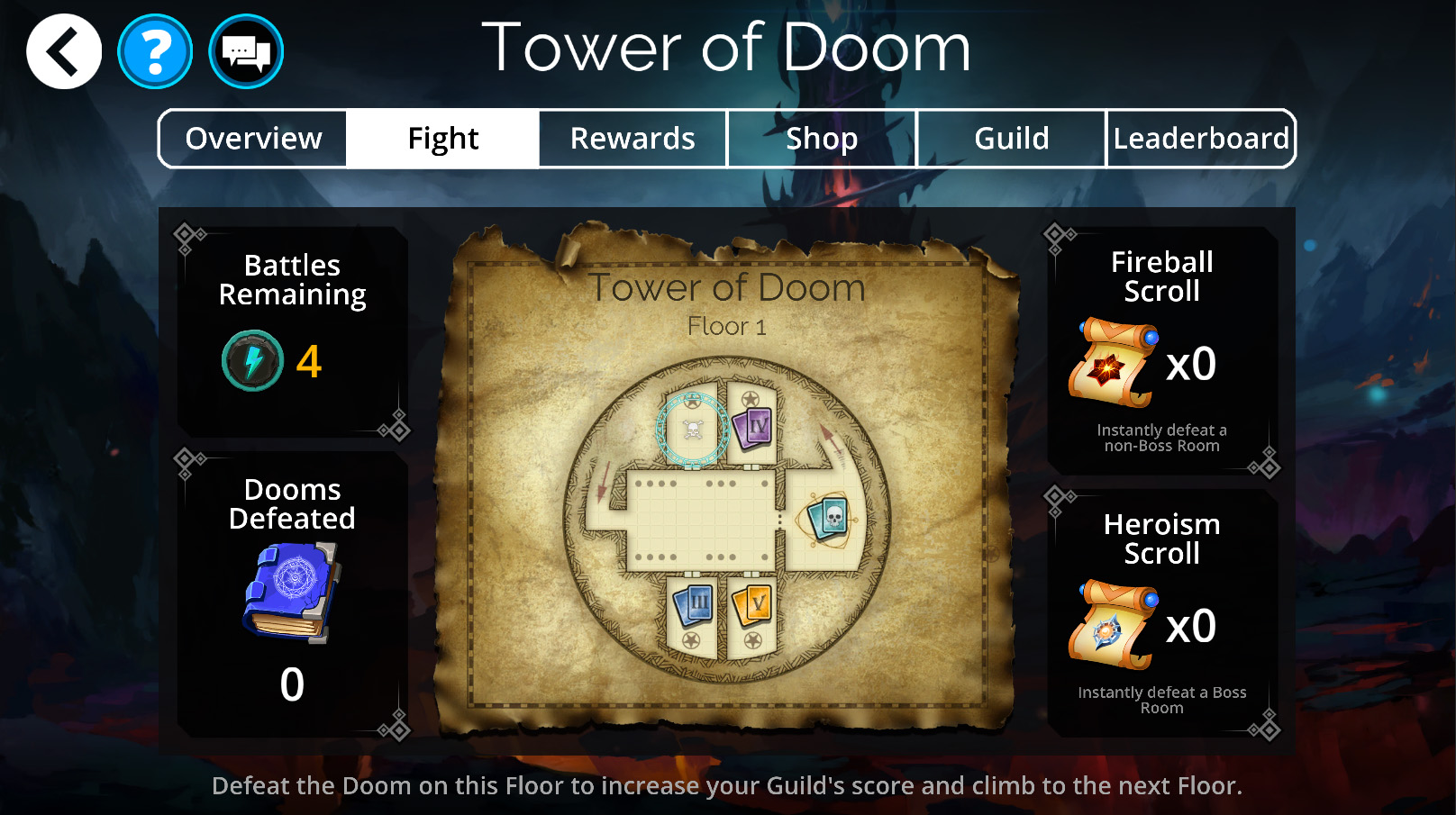 * All rooms will give scrolls that can be used to help players and their guilds progress through the Tower
* There are 10 types of scroll available in any tower: 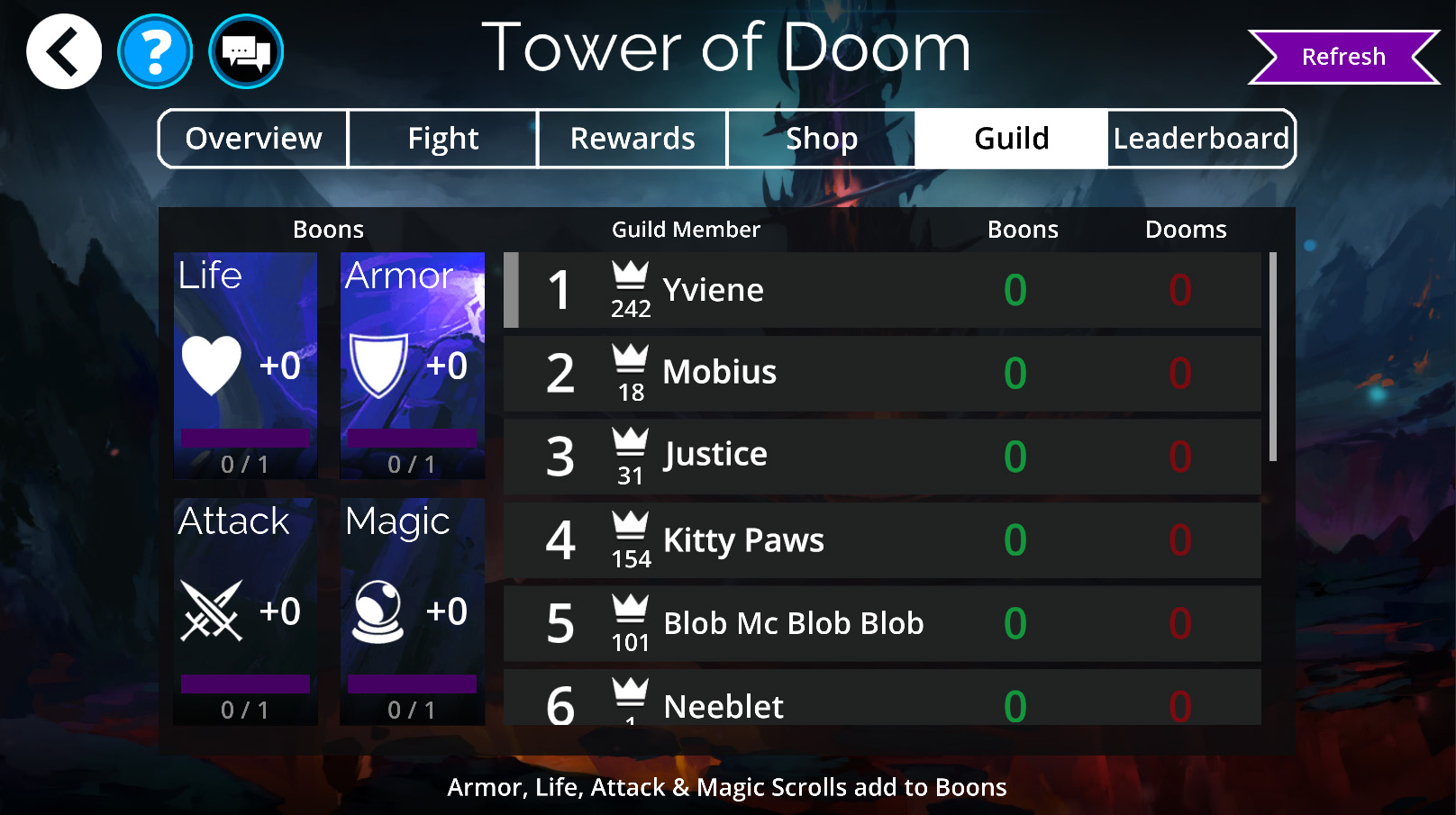 * Each Guild Boon found counts towards earning skill points for everyone in the guild. Once enough Boons (of a given type) are obtained by guildmembers, everyone earns a point. For example, the first player to find a Life Scroll, earns a point of Life for everyone in the guild. Then, when two more Life Scrolls have been found, everyone earns another point of Life. Then 3 more Scrolls, and so on.
* Any unused scrolls (with the exception of Forge scrolls) will disappear after the Tower of Doom ends (so they can’t be carried over to future Tower of Doom events)
* All Forge scrolls earned will be kept and can be viewed in the player’s inventory
* A new Weapon rarity, called Doomed, has been added. A Doomed Weapon is available in every Tower of Doom event.
* Doomed Weapons can only be upgraded using colored Forge scrolls from the tower of a matching color (they may not be upgraded with regular ingots):

* Similar to other Guild events, when the guild defeats a set number of Dooms, all members of the guild will be able to claim rewards
* There are 12 stages of rewards for guilds to work towards. The final stages will require a strong commitment from large active guilds.
* There is also a leaderboard for guilds to compete on, which displays the top 100 Guilds (sorted by total Dooms defeated)
* At the end of the week all guild members will receive rewards based on their guild’s position (including any guilds that don’t quite make it into the top 100)
* Doom Troops (just regular ones, not Ultimate ones) will be abled to earned as Tower of Doom rewards or from the event shop 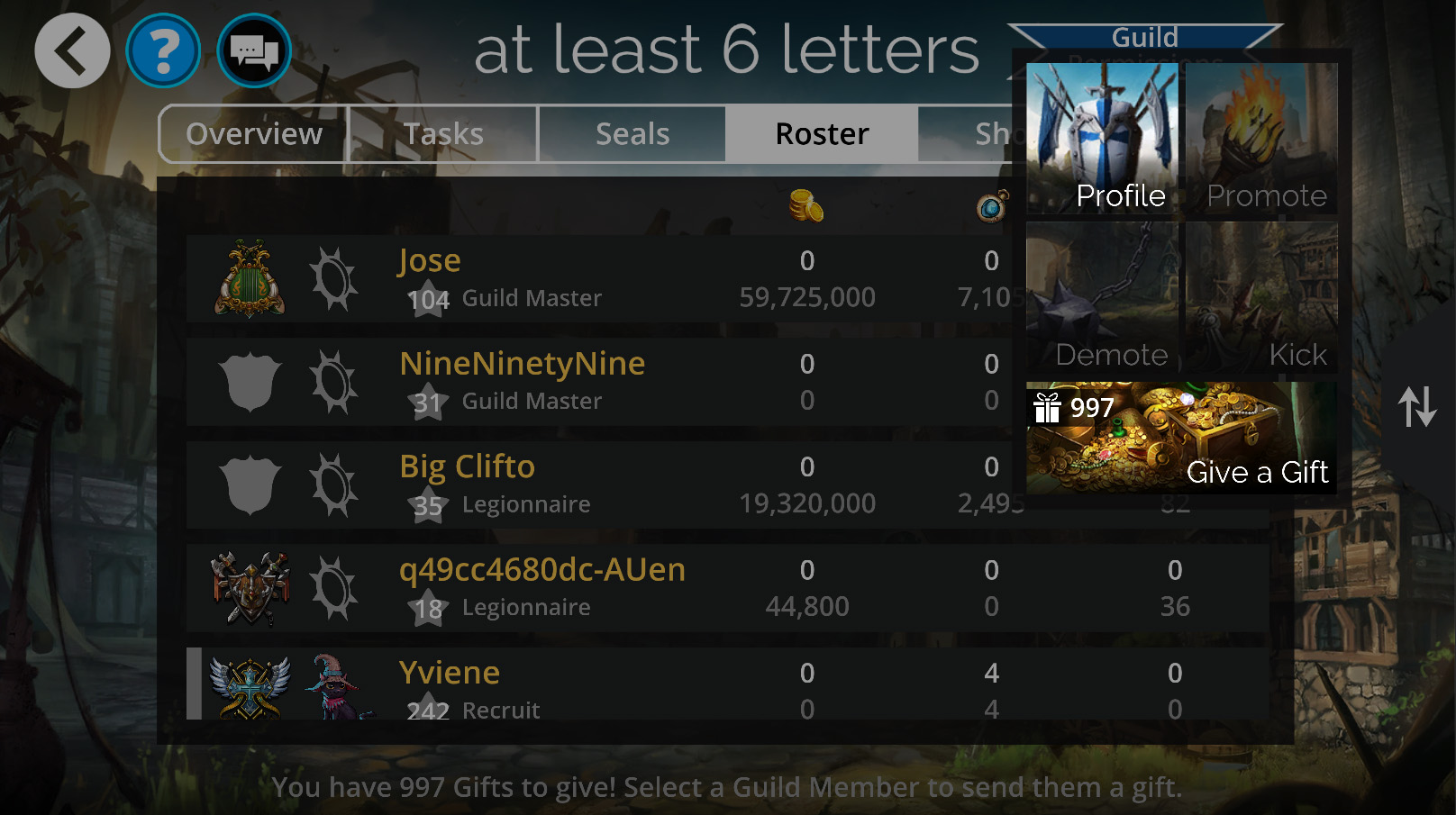 * Players are now able to send Gifts to their guildmates. This is done from the Roster menu
* Gifts can be gained from purchasing Guild Bundles from the Guild Shop
* Guild Gifts contain 25 gems, which can be all gifted to a single person, or spread around different guildmates
* Gifts received can be collected from the Mail Menu
* Any Guild Gifts a player earns, can be carried over to another Guild if they choose to change Guilds

* Flash Offers have now been added to the game
* These offers have limitless variety, but initially will focus in 3 areas: 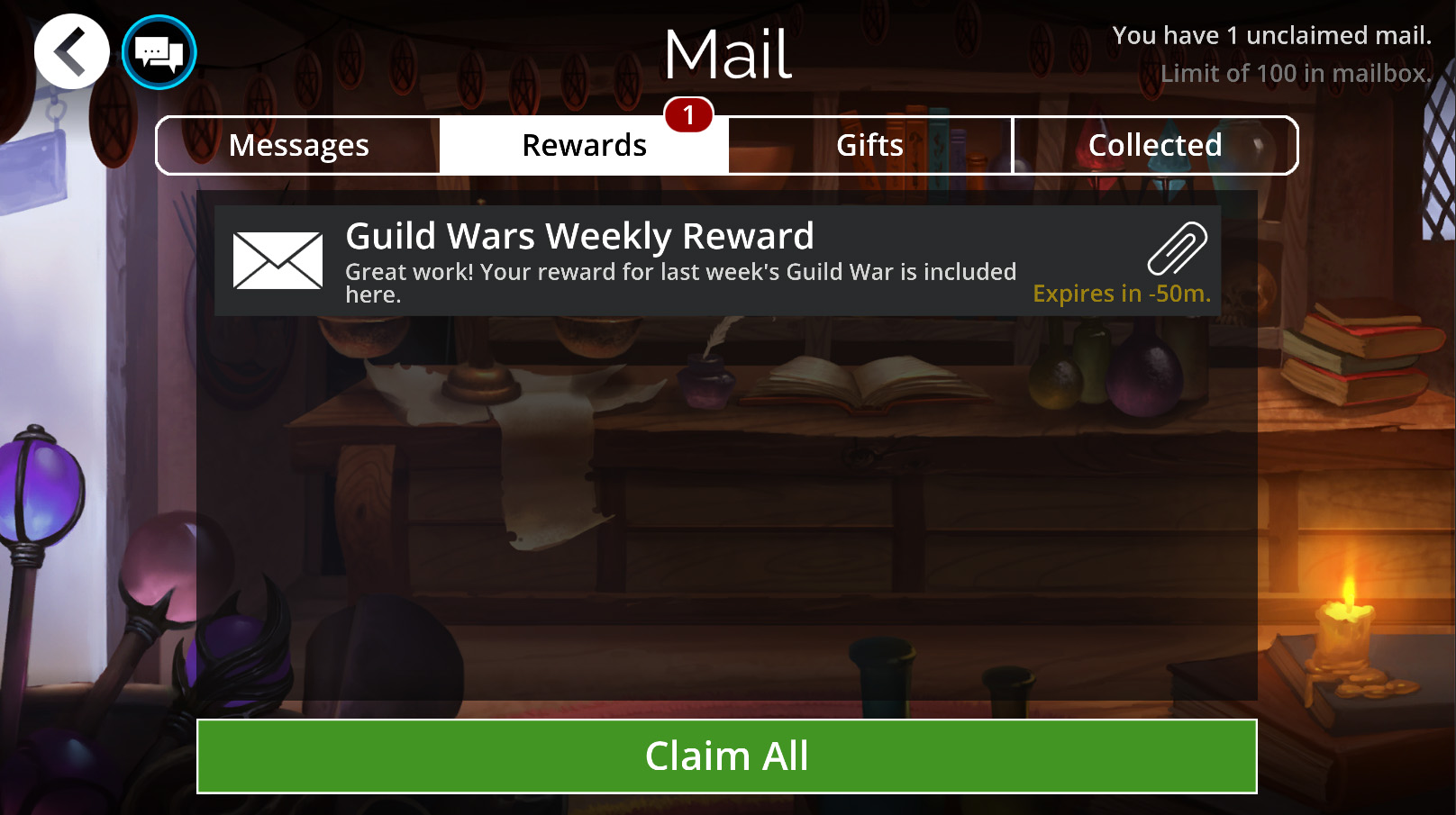 The Mail menu has been upgraded to reflect recent changes in the game.

We noticed a lot of players interacting with Faction Events by simply replaying the first difficulty (Level 20) and losing on the boss room, over and over again. Obviously this was not how we intended the event to be played, so we’ve made some changes to scoring.

New Tutorials
We have added new tutorials that will unlock during play. These include:

We have 2 new achievements are available on PS4, XB1, Steam and Google Play. 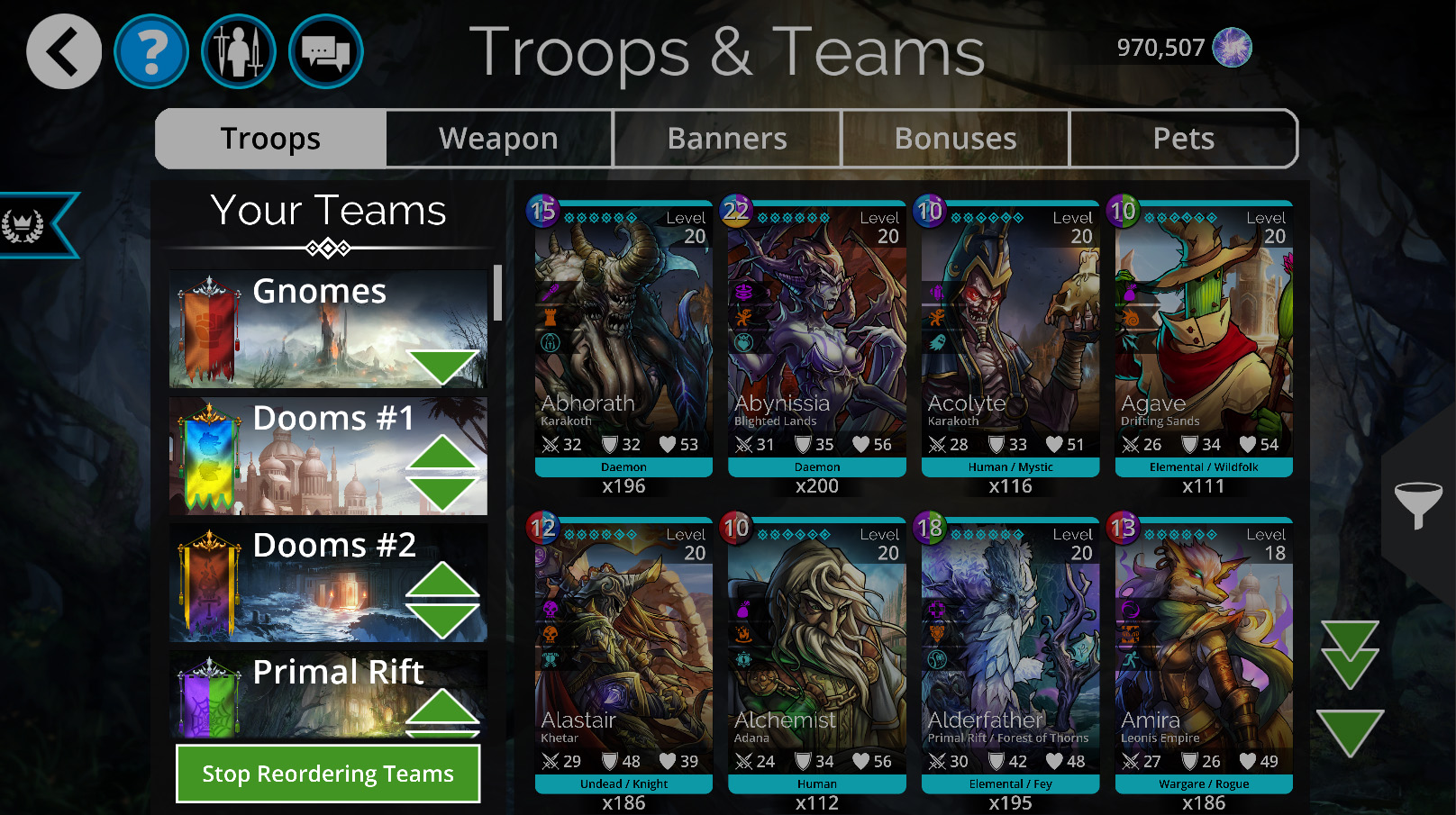 * New Weapon, Axe of the Spire added to the game
* A new Tower, Haunted Tower, will appear in Invasion during the week of Halloween
* Troops menu should now initialise faster and without freezing
* 20 New Rooms can now appear in Delves + Tower of Doom
* Guild Level Requirement can now be edited (and now goes up to level 1000)
* Event shields now show up in their related News
* Faction Shields now show up for a News about new Faction releases
* Troop Filter can now be saved between sessions, just select the button in the top right corner of the Filter menu
* Updated the Game Credits
* Alerts tab in Settings menu has been extended to include more options
* Added a slider for adjusting Controller Map Highlight Sensitivity in the Settings menu
* Hero Inventory has some improvements to make navigating the player’s inventory easier
* Added Team Reordering into the Troop Collection Menu (the REORDER button is below the team list)
* Troop Bonus callouts will now display the Skill Points gained from each Bonus by fading between the description text, and the Skills gained
* When a transform spell targets an enemy, it will now transform the target into the creature of half its original level, rather than a predetermined level
* Event teams used in Pet Rescue are now saved, so when a player next encounters the same Pet Rescue enemy the correct team should already be set up
* Bounty teams are now remembered and set up for the next Bounty event
* Changed unlock levels for Adana, and Karakoth. These changes to assist in the flow of the early game. Kingdoms will now be able to be unlocked at the following levels:

* Fixed an issue on several traits which were triggering when matching skulls instead of dealing skull damage. This should now match the traits’ description and will no longer trigger if the troop is entangled. (Bonus damage from 4+ Gem matches or Doomskulls, will count as dealing skull damage).
* Mouse Wheel on PC should no longer work when the game is not the active window
* Quest and Challenge Progress updates on the Kingdom Popup Menu when returning to the menu from a Quest or Challenge
* Gem Icon no longer overlaps with text in the News Menu
* Running the game in Chinese should no longer have weird scaling issues (items on screen too small)
* Faction Stone Block setups should spawn correctly in Live Event Delves
* Fixed an issue with troops remaining on screen, even after death
* Fixed issues with some textures disappearing on console
* Fixed left-stick click not functioning correctly on chat menu on console
* Players above level 1500 will now see their next stat increase correctly when levelling up
* Some minor Guild Wars improvements, such as fixing the text that displays when a guild war has ended
* Other minor bug fixes and improvements

* Visual issue on Legendary Tasks menu, where the possible rewards are incorrectly displaying as Gold (rewards are still sent out and received correctly and don’t affect mail)
* If you previously disabled all Alerts in 4.0, then try to re-enable Alerts after updating to 4.1, it will appear as if Alerts are enabled. However, any Alerts that are not classified as “Inactive Reminder” will not be received. To solve this, please remove the app and install it again. We will have a fix for this in the 4.2 Update.
* Visual issue with changes to the Faction event point change, the points display on the room will still display points of the old version, however points will be rewarded correctly. This will be fixed in the 4.2 Update.