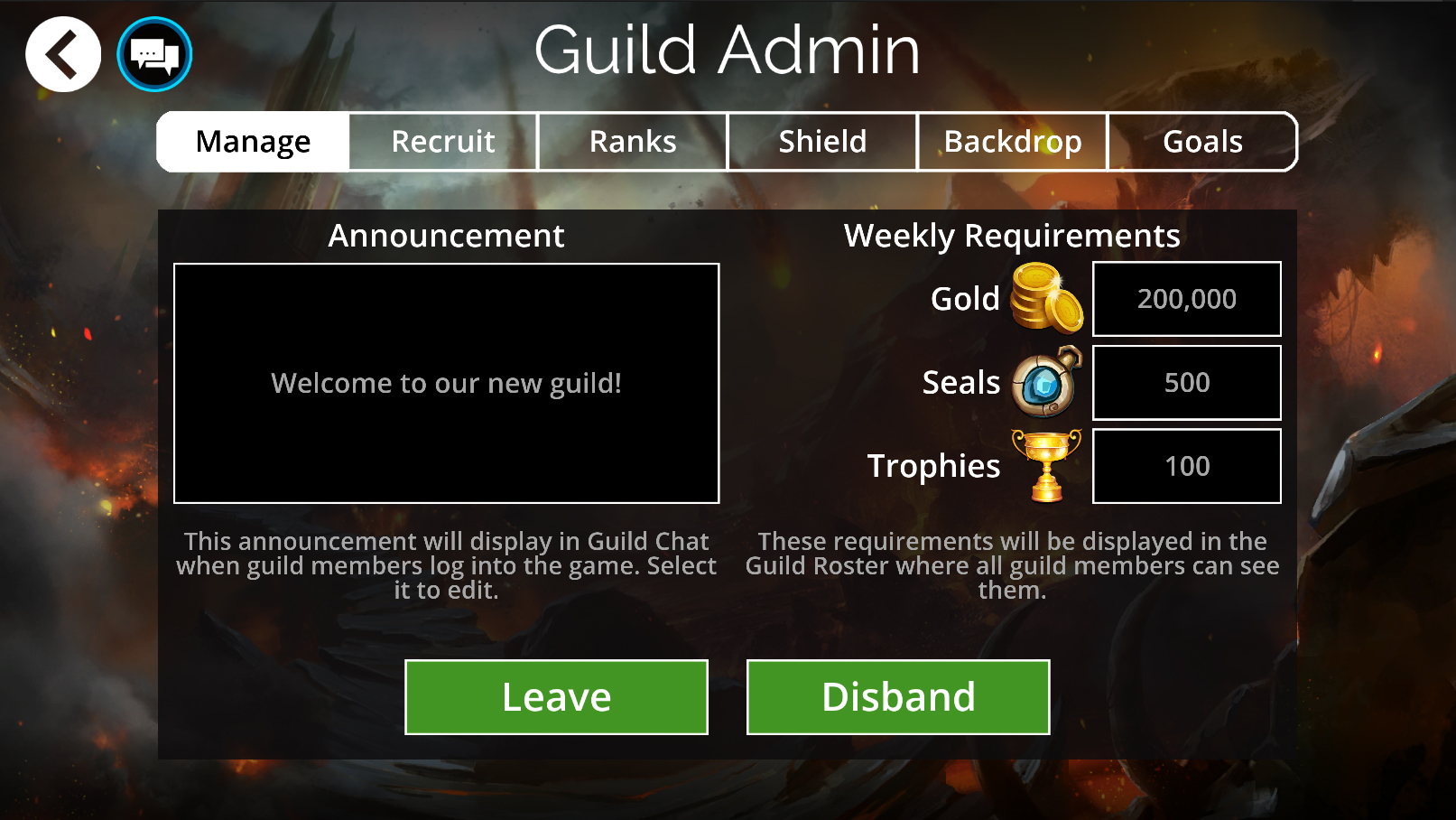 The Guild Admin menus have their own new screen, which can be accessed from the Guild Pop up menu.

Recruit
* Guild Leaders can set up their own recruitment message (this includes listing out any requirements the guild might have)
* A new Slider has been added so the guild can set how “casual –> hardcore” they are
* Guild Requirements, the Recruit message and Slider settings will be displayed for guilds in the Guild Search menu 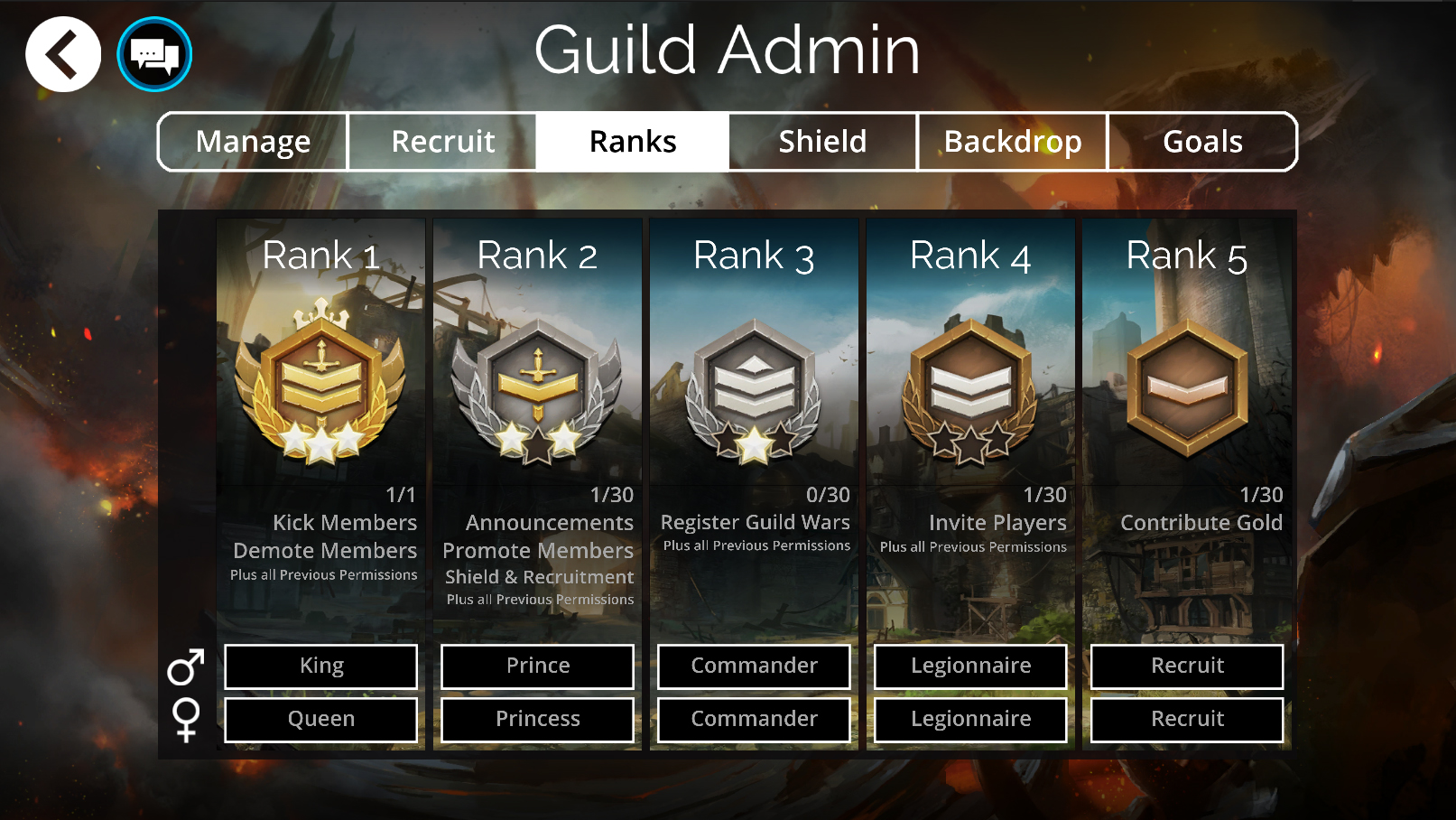 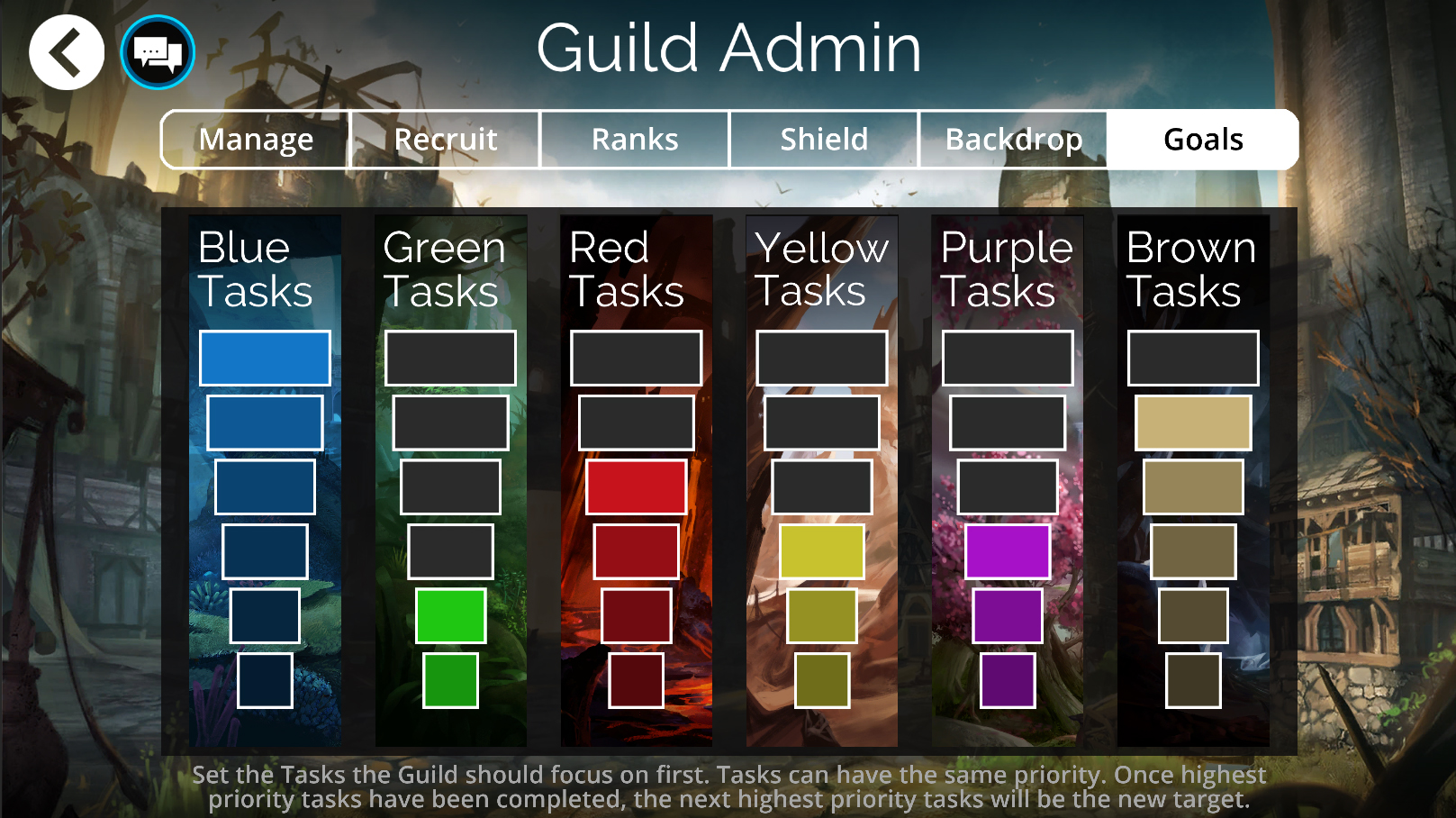 Goals
* Guilds are now able to set sliders to adjust Guild Task priorities
* On the Guild Task screen, the task with the highest priority will gain a glow effect indicating to other members that this is the task they should be focusing on first
* Once the highest priority tasks are completed, the next task(s) will gain the indicator
* Tasks can share priorities, meaning that 2 or more tasks will gain the indicator on the task screen, and won’t move on to the next priorities until both are completed 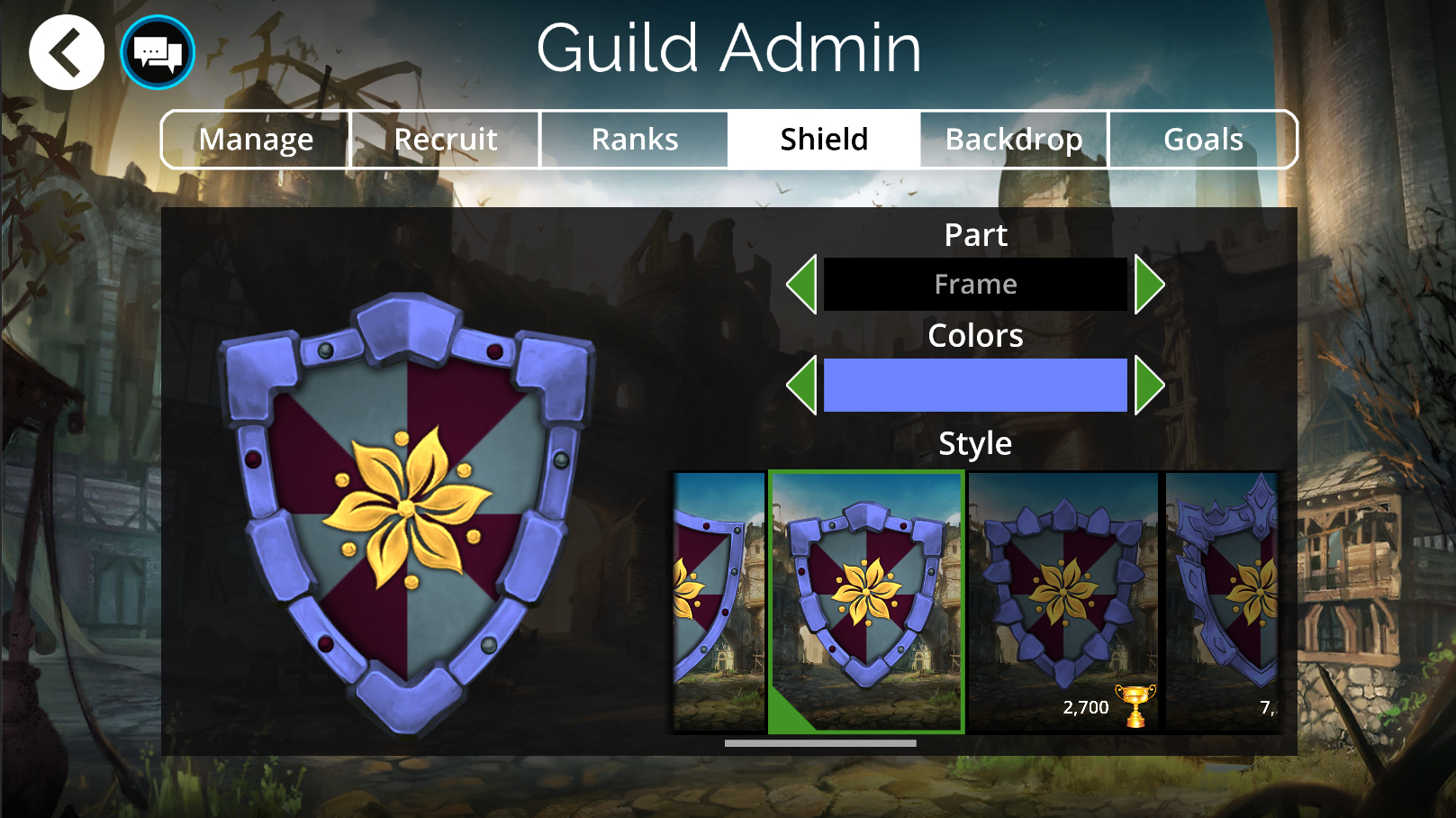 * Guild Shields have had a graphic update
* Guilds can now customize shields further with the additions of Shield Borders and Shield Patterns
* Some shield parts can only be unlocked by guild achievements including:

* More shield parts will be unlockable in the future, as well as new unlock methods 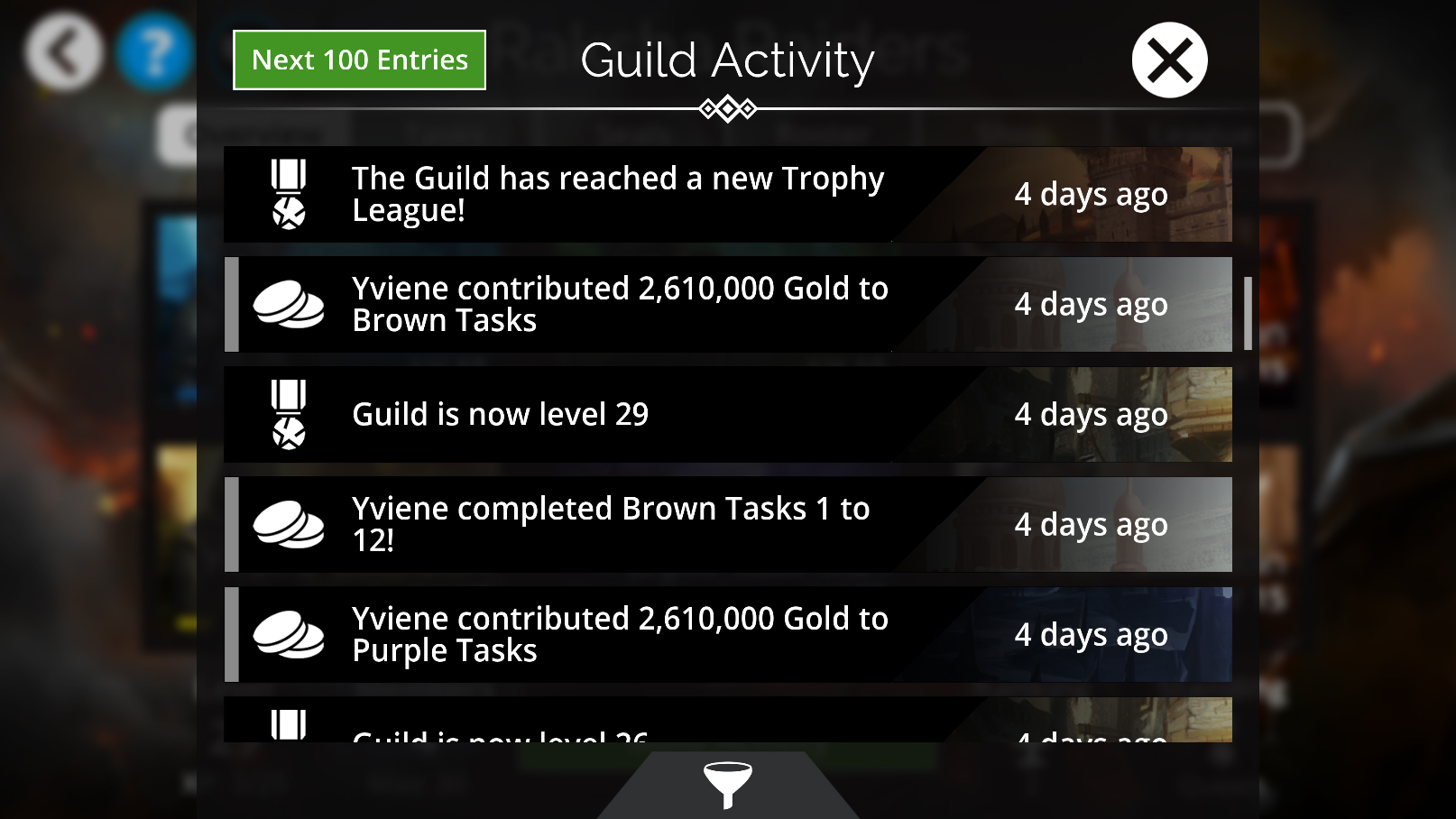 * Guild Ranks no longer have limitations on the number of players for each rank (except for Guild Leader/ Rank 1 which is still only 1 player)
* Guild members will now be marked as inactive on the Roster list if they haven’t played for some time (about 21 Days)
* Any guild member who is marked as inactive can be kicked from the Guild, this includes inactive Guild Leaders
* If a player is not Rank 1 or 2 in their guild, the Guild Leave Button will be displayed in the Guild Pop Up (the menu where the guild events are accessed from), instead of the Guild Admin button
* If a player decides to leave a guild, there is a 2-day cooldown for re-joining that guild
* Any player kicked from the guild will not be able to re-join that guild again. (This was introduced to stop trolls re-joining guilds they had previously been kicked from)
* Players can be invited back into a guild without being affected by the guild joining cooldown 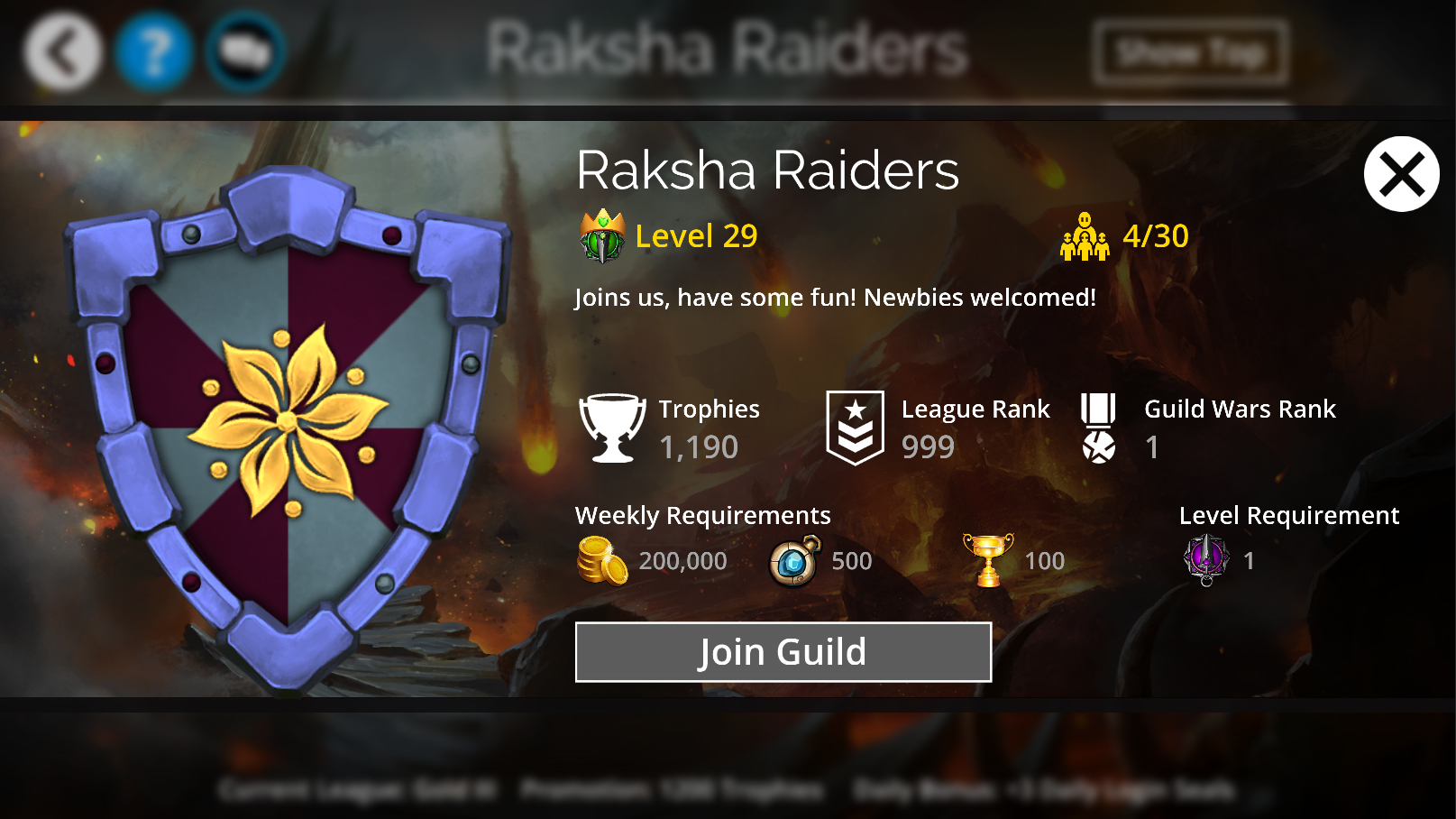 * Guilds now have a profile that can be viewed
* The profile will display:

* The profile can be viewed from:

* Players can join a guild from the Guild’s Profile Popup, if that Guild doesn’t have “Invite Only” turned on 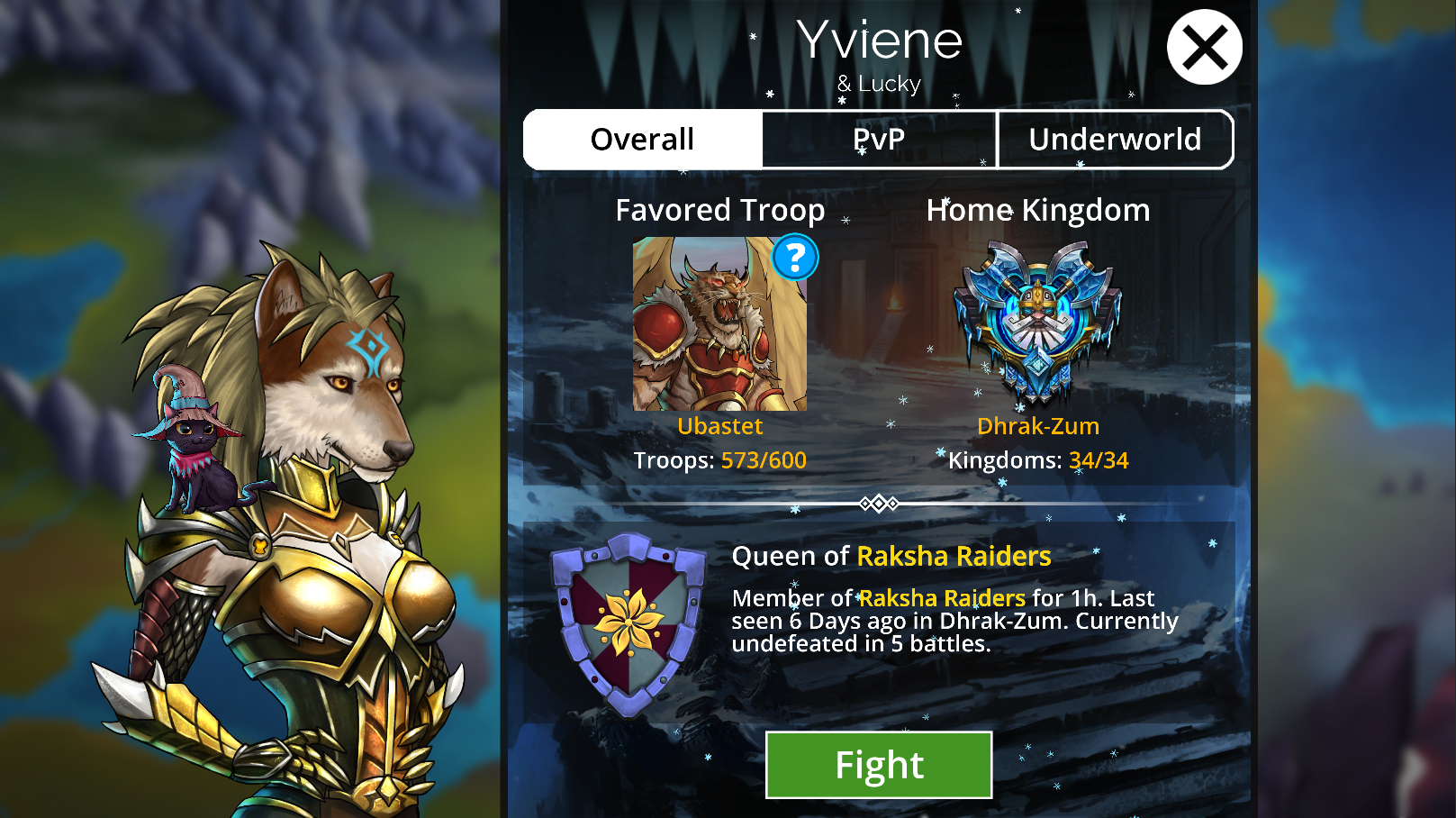 * BLESS: This is a positive status effect that grants a temporary Impervious effect, and cancels out the Cursed effect (see below). Bless ends when you cast a spell, or deal damage with skulls as the first troop.

We have 3 new achievements on PS4, XB1, Steam and Google Play.

Winter Imp
* Legendary Trait, Chill now gives 8 Magic instead of 1
* Spell now freezes all remaining enemies, if an enemy dies (instead of gaining magic)
* Base spell damage increase from 3 to 4
* Boost ratio increased from 2:1 to x2
* Now also gains Magic at levels 14, 16, 17, 19

* Added an ‘Ascend All’ button in the troop upgrade menu

* While a Storm is active in the puzzle game, clicking the Left Stick on a controller or tapping on the Storm’s Gem will display a help window giving more information about what the Storm does
* Additional Alerts have been added for various events that occur
* Alerts are now possible to enable in your web browser (Windows and Android based browsers)
* Improvements have been made to our asset servers, which should see significant increases in download speed when assets are downloaded or updated
* A new Gnome, the Jewel Gnome, can now be found in PVP and Explore battles

* Hero level is not displayed on the new Hero Profile
* Help button on Alerts tab in Settings menu does not function on Steam/Mobile.

Help Center Articles
We’ve updated and added in new article on our Help center for the 4.2 Update: