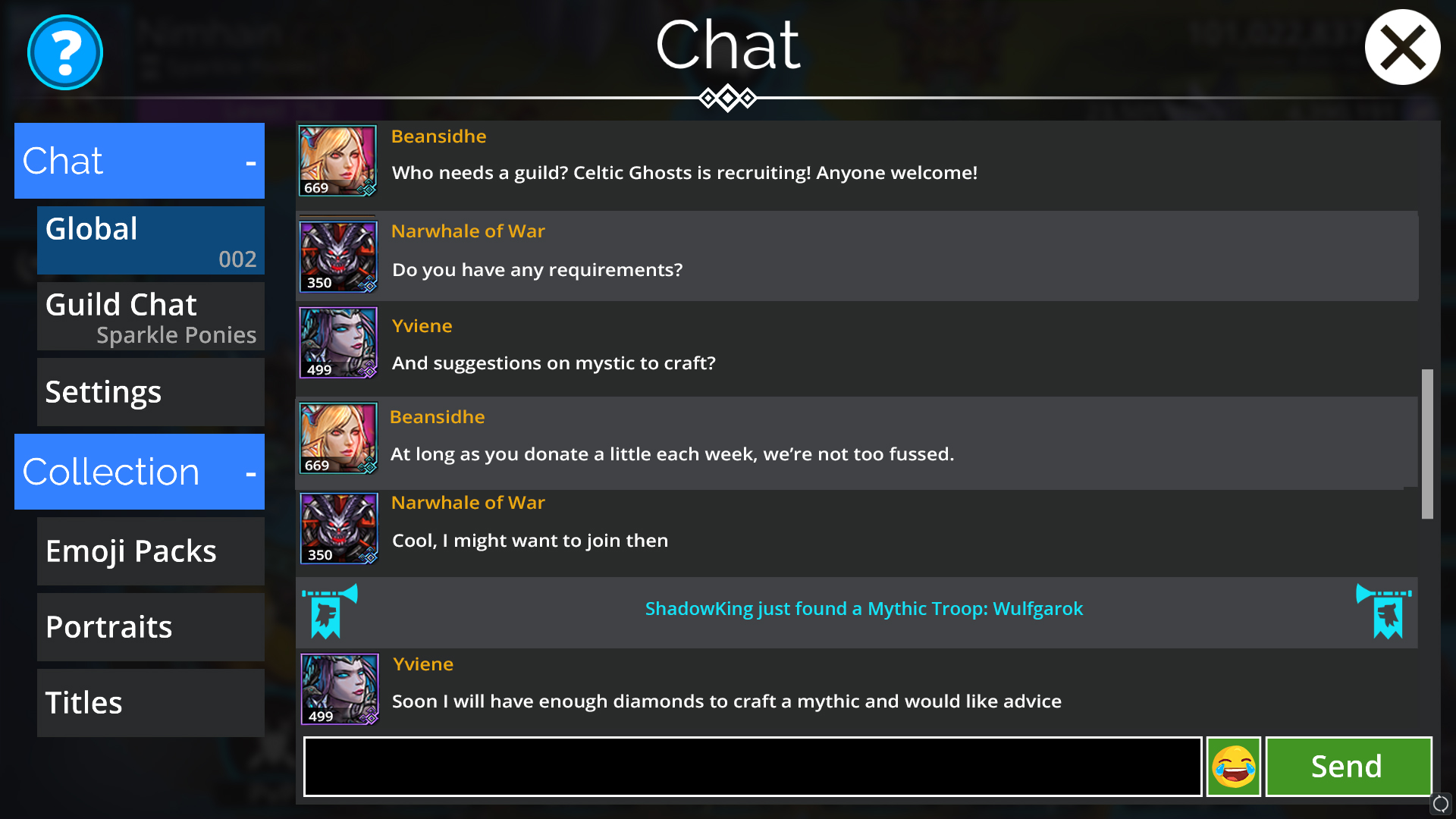 * Chat screen has received a new layout design
* The new layout should be more intuitive to use, and better match the rest of the game
* Chat lines now have alternating background colors (black and grey), making conversations easier to read
* Chat lines from a single player will also be batched together to improve readability
* A new menu system will appear on the left side of the chat window
* The menu allows players to switch between Global and Guild Chat, adjust their settings, or view their social collectibles (more on that below)
* Player portraits (more on those below too) will appear as part of their chat message, and include frames based on their level, the actual level number, and small “flares” showing that player’s Honor Rank (also more coming below)
* Players are now able to use unlocked emojis in chat (which are part of the social collectibles)
* Players are now able to exit Global chat but still be part of Guild Chat
* Chat Window can be shrunk down into a “Lite Chat” window for anyone wanting to navigate the game while watching chat
* The mini Chat window is a simplified version of the main chat window, so somethings may not visible in this mode (such as chat portraits or titles) 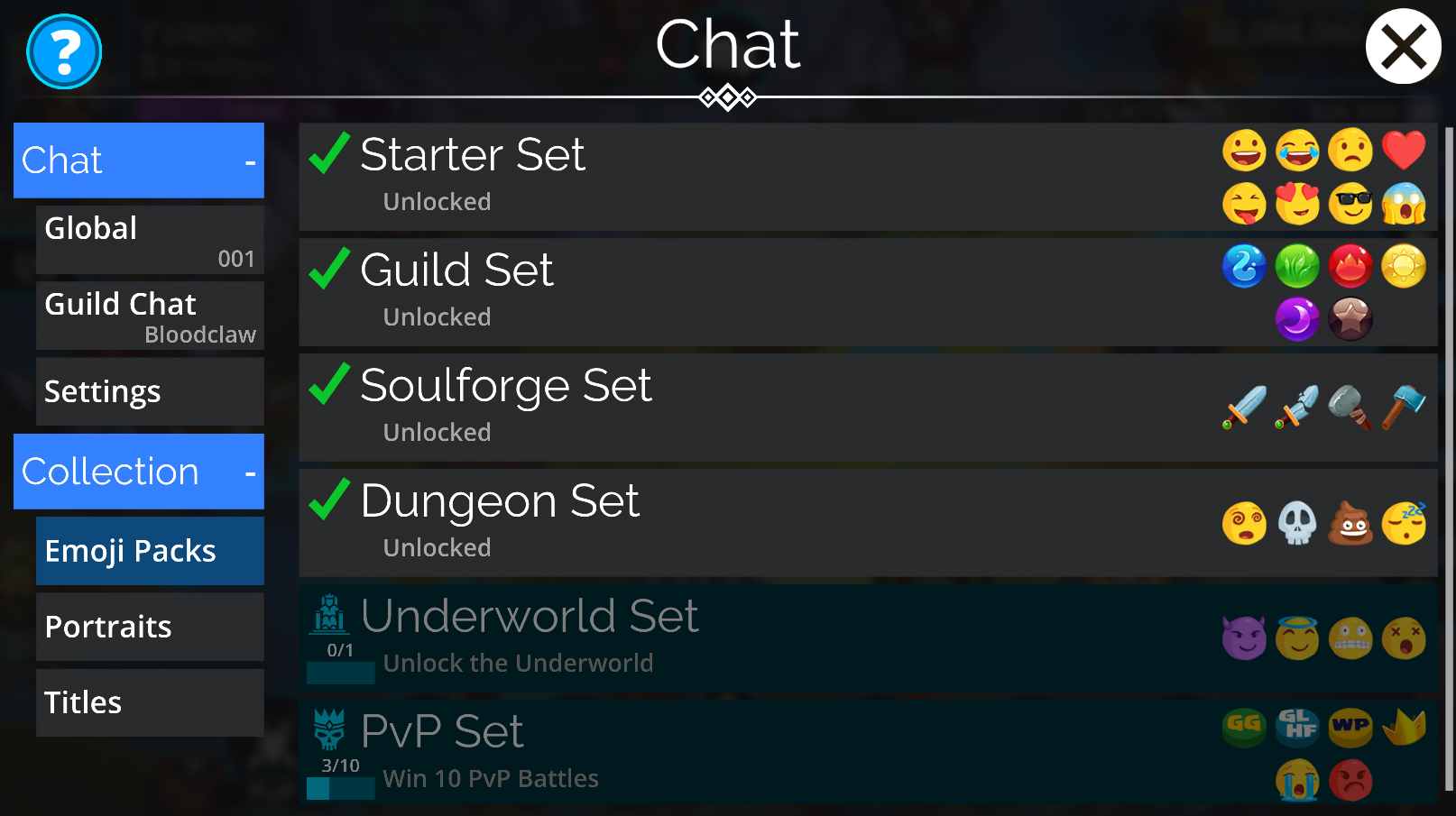 With the improvements to Chat, we have added 3 new types of collectibles for social:

* All collectibles are displayed and managed in the Chat Menu Collection sections
* Special Seasonal Social Collectibles will available for a limited time during their seasons (More Information to Come)
* Past Event collectibles (if you didn’t get them from their event) will become available to purchase in the Chat Menu for a small Gem Cost – usually 2-3 months after the event. 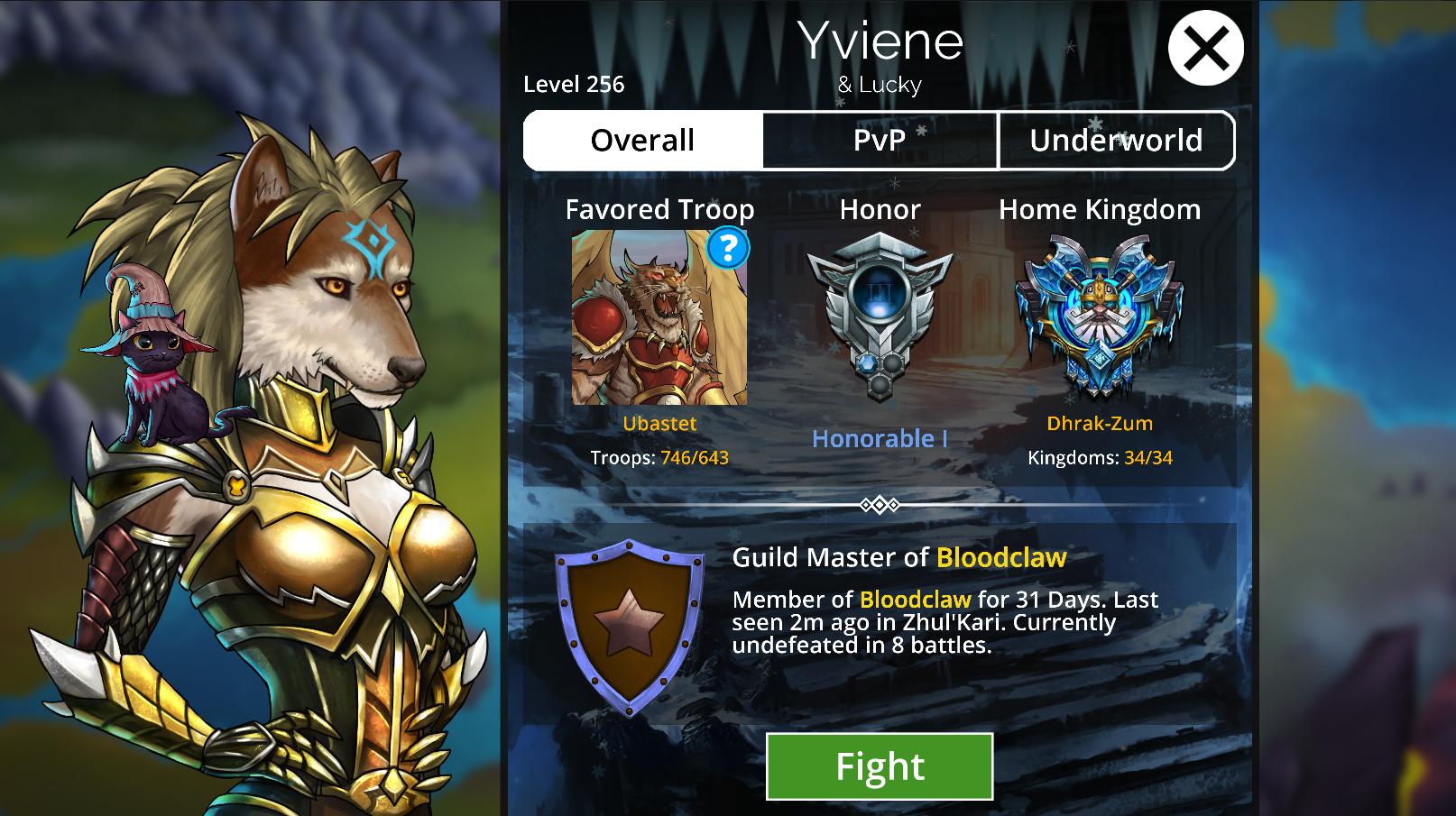 * We have implemented a new Honor system to reward players who provide a fun and welcoming experience for others * Players gain Honor ranks when other players “Honor them” by awarding them an “Honor Point” * Starting at level 20, players will start to receive 2 Honor points per day (when they login) that they can give out * Daily Honor Points will stack up to maximum of 5

* Honor can be given in 3 ways

* We have 3 different options for players to choose from to help define what they are honoring that player for: 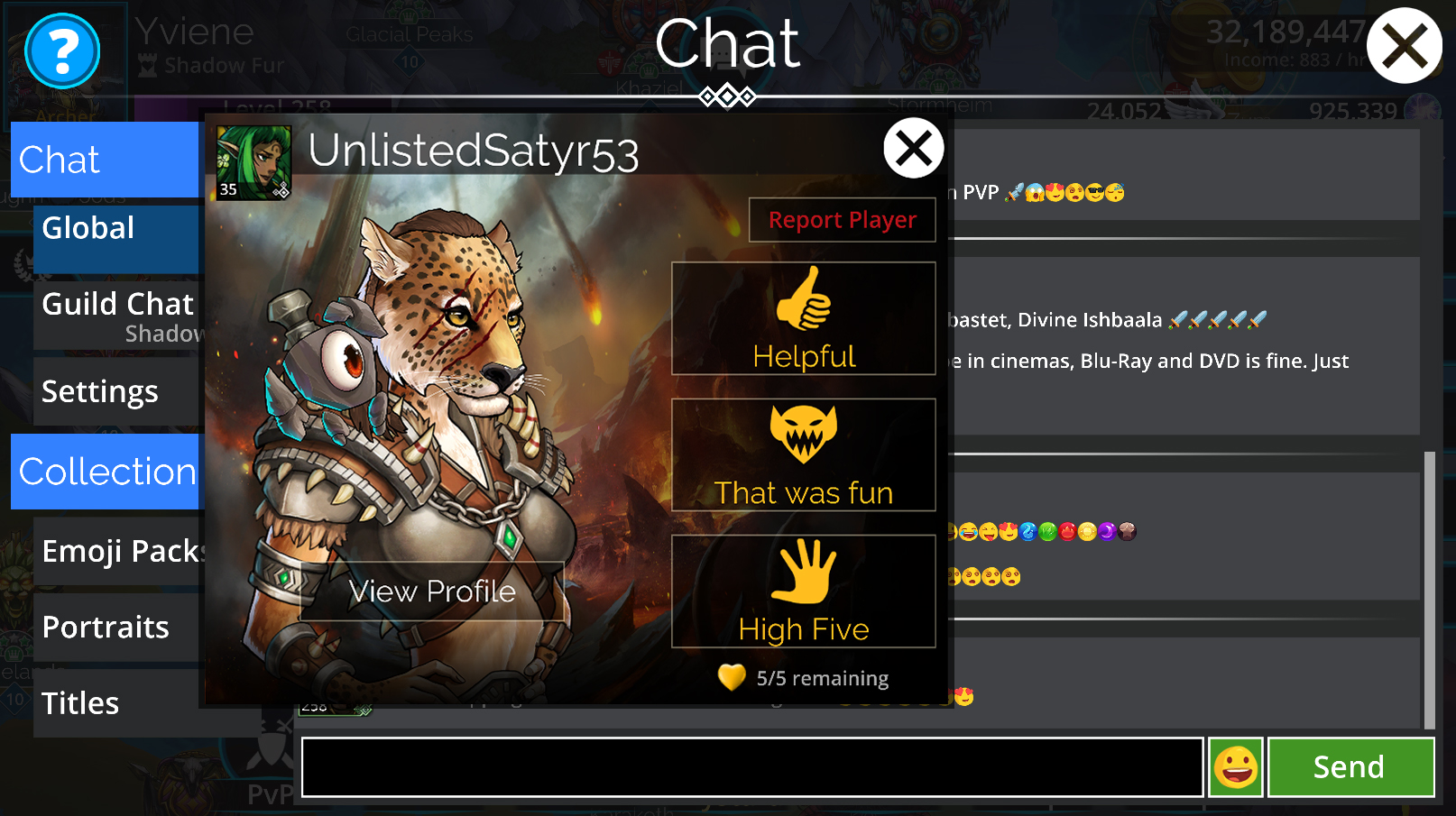 * Any Honor you receive will be displayed when you next collect a tribute * There are 6 ranks of Honor that can a player can have, these are (from highest to lowest)

* Respected, Honorable and Exemplary have multiple tiers within their rank that players will have to ascend through in order to reach the next rank. Note that we have opted NOT to display earned Honor as a progress bar, as this system represents something that we want people doing for “right” reasons, not simply another stat to min-max and cap out.
* Tiers within a rank will be marked by special gems that appear on the Honor rank’s shield
* All players will start at the lowest tier of Respected
* Players can see other people’s Honor either from Honor flares (if the Honor rank/ tier has one) or from a player’s profile (this is only visible on Honor Ranks of Honorable and Higher) * Honorable Honor rank or higher will unlock a special login calendar that will give rewards out daily * Daily rewards will increase based on the Honor rank, so high Honor ranks give better rewards than a lower rank * Achieving some higher Honor ranks for the first time will give players unique rewards, including a special pet – the Revered Dragonkitty – if you reach Revered status. * Players will receive a pop up when they gain or lose Honor ranks 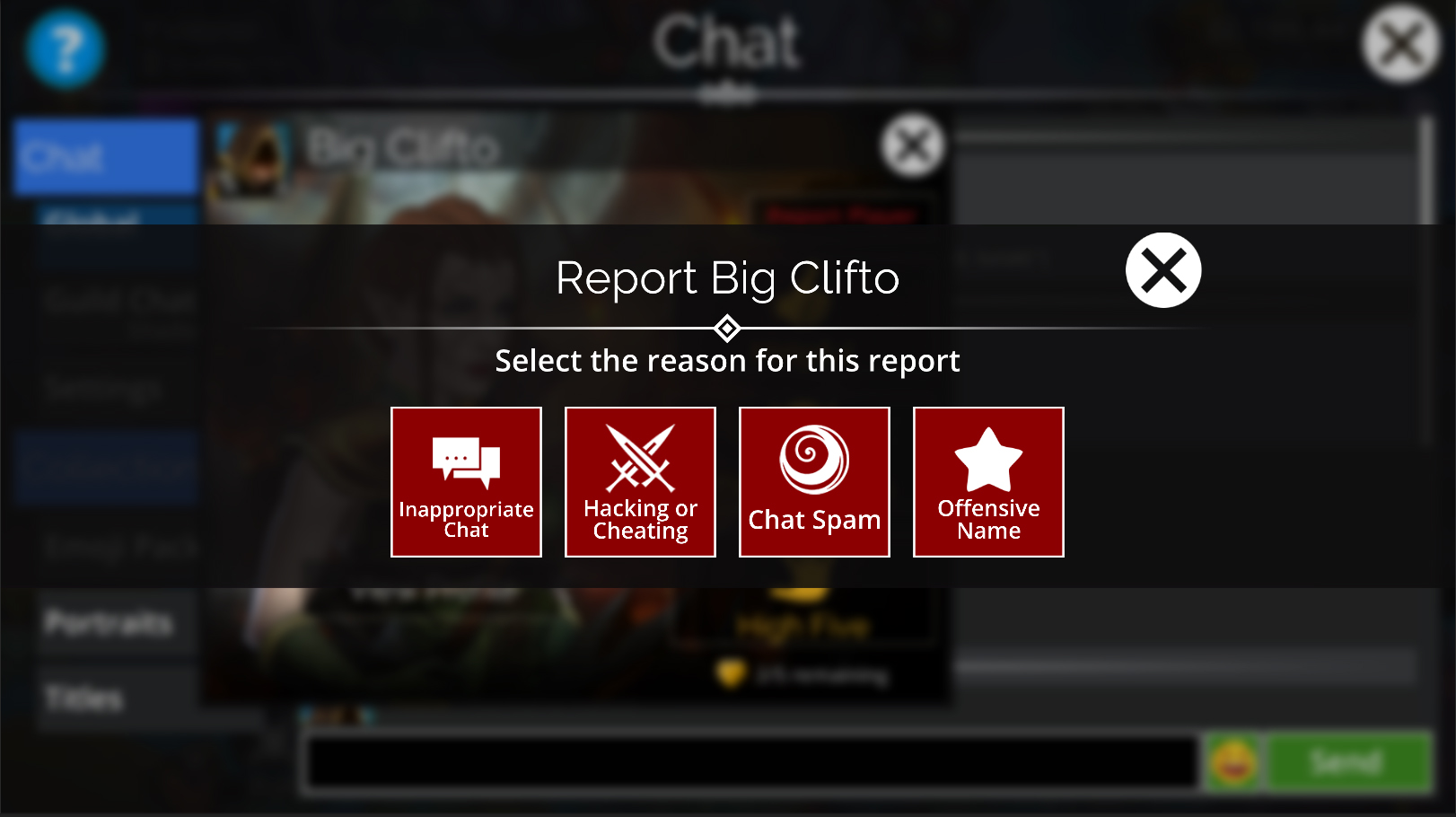 * Players can now be reported in-game, saving time sending reports directly to our support channel * We have 4 categories that players can be reported for:

* We have also improved the way in-game notifications work for warnings or information about bans (including Chat Bans) * We have also added an in-game system that will notify players who have reported others, if their report has been acted upon (this means that if a report does result in a warning or ban then any players that reported that person will receive the notification) * Presently all reports will be manually processed by our support team, so nobody will be auto-banned by the report system. This may change in the future as we gather data, and feel confident to implement automations. * Players will lose Honor ranks for any bans or warnings issued by the Gems of War team * Players who lose points, may drop Honor ranks to the Warned or Dishonored ranks 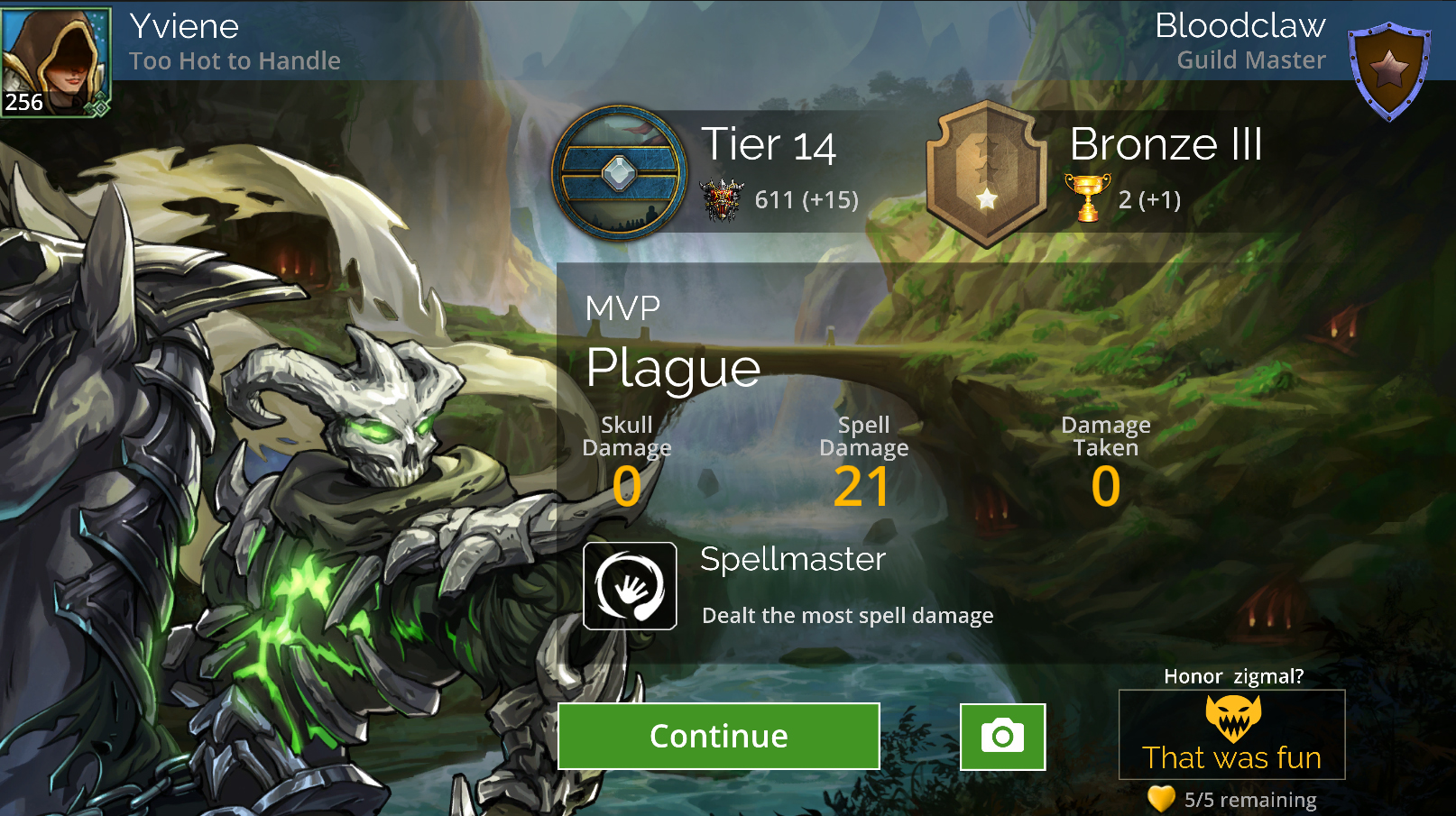 * The final screen in the PVP game flow has been reworked
* The new screen continues to display the player’s rank and trophies earned (also including the Guild current trophy rank)
* New to the screen is a Troop highlight, which will name one of the player’s troop the MVP of the match * There are multiple MVP categories that can be awarded to troops, allowing utility or support troops who perform well to be highlighted too, not only the damage dealing troops. * Player’s will always see a troop from their team here, keeping attention on their team rather than their opponent’s team. * The screen also allows players to take screenshot or share the screen, so players can compare their MVPs with friends or guildmates outside the game. * This screen is also where players can Honor their opponent for fun defense teams 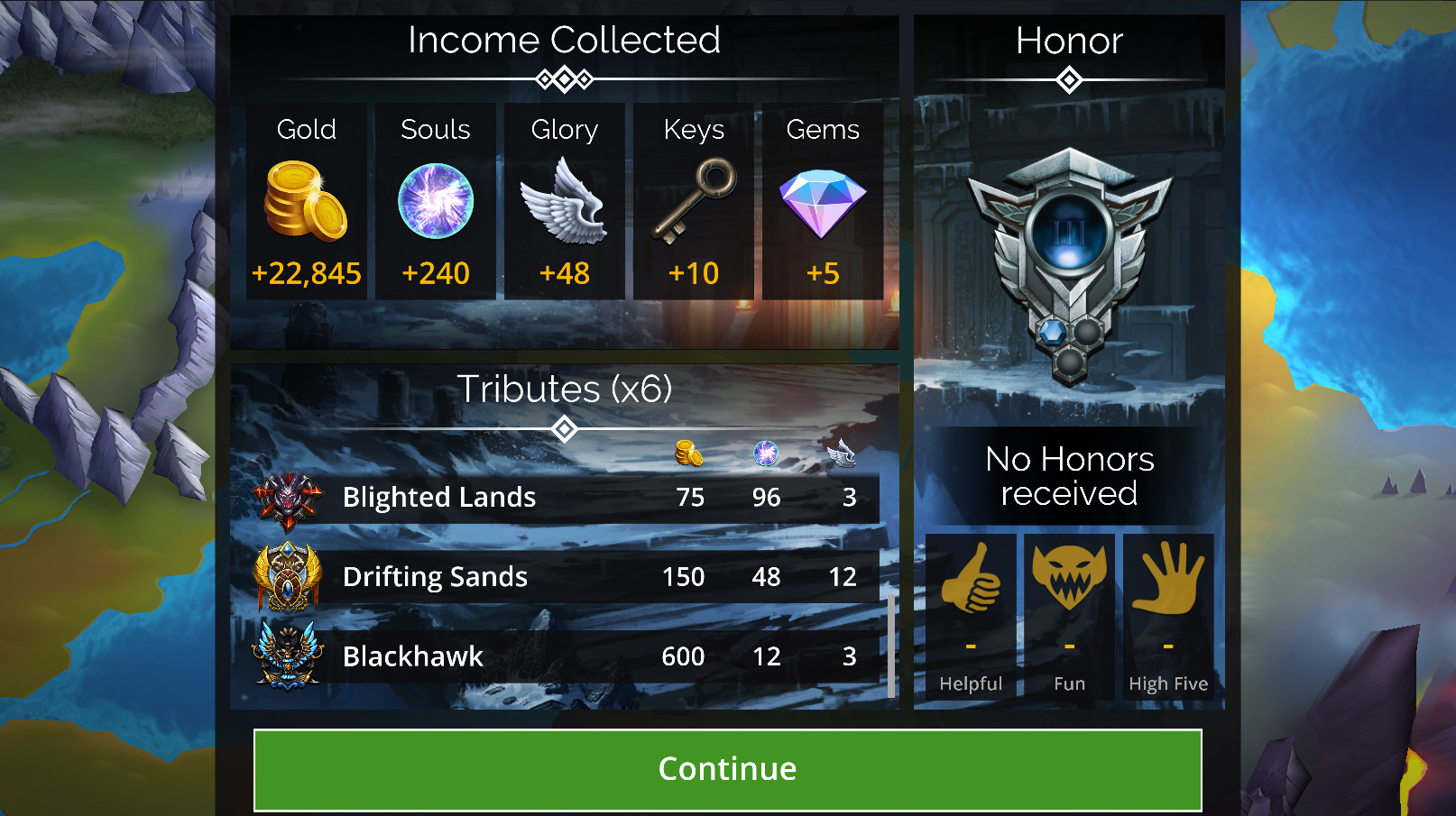 * Most events have had a new feature added into the shop: Potions
* We’ve added a different potion for each purchase-tier in the shop
* These potions will give a unique effect that will apply to all troops in that Live event * Please Note – although these potions may help with tougher Faction Delve levels. they are not intended to be the system we’ve hinted at for dealing with Faction Team difficulty on higher levels (we have something planned for this later this year) 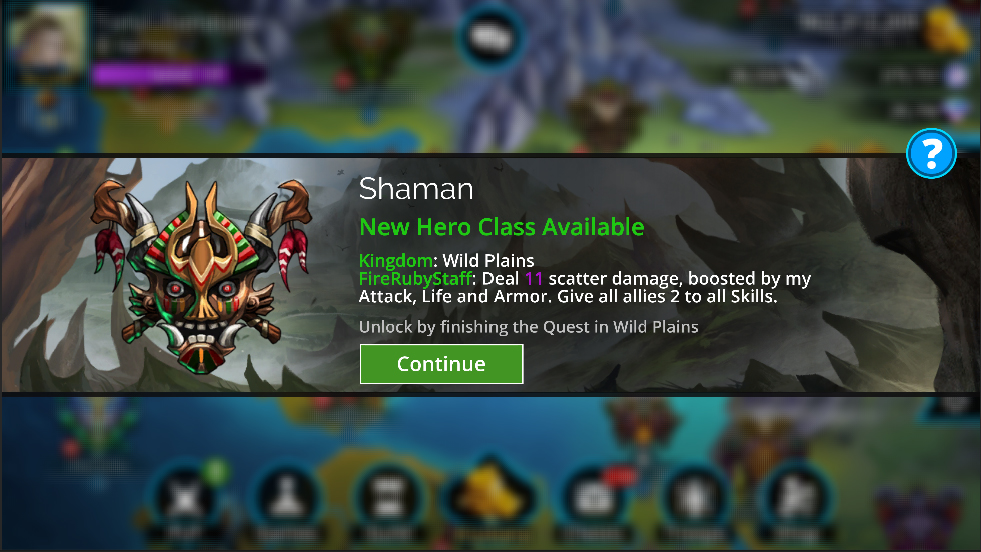 * We’ve added a new popup to the game that will better inform players when special events (eg. New releases like Mythics, Factions, Hero classes etc.) occur
* These callouts will only appear once to inform players of the event, then disappear
* These events will continue to have News articles in the News Menu for any player wanting to learn more 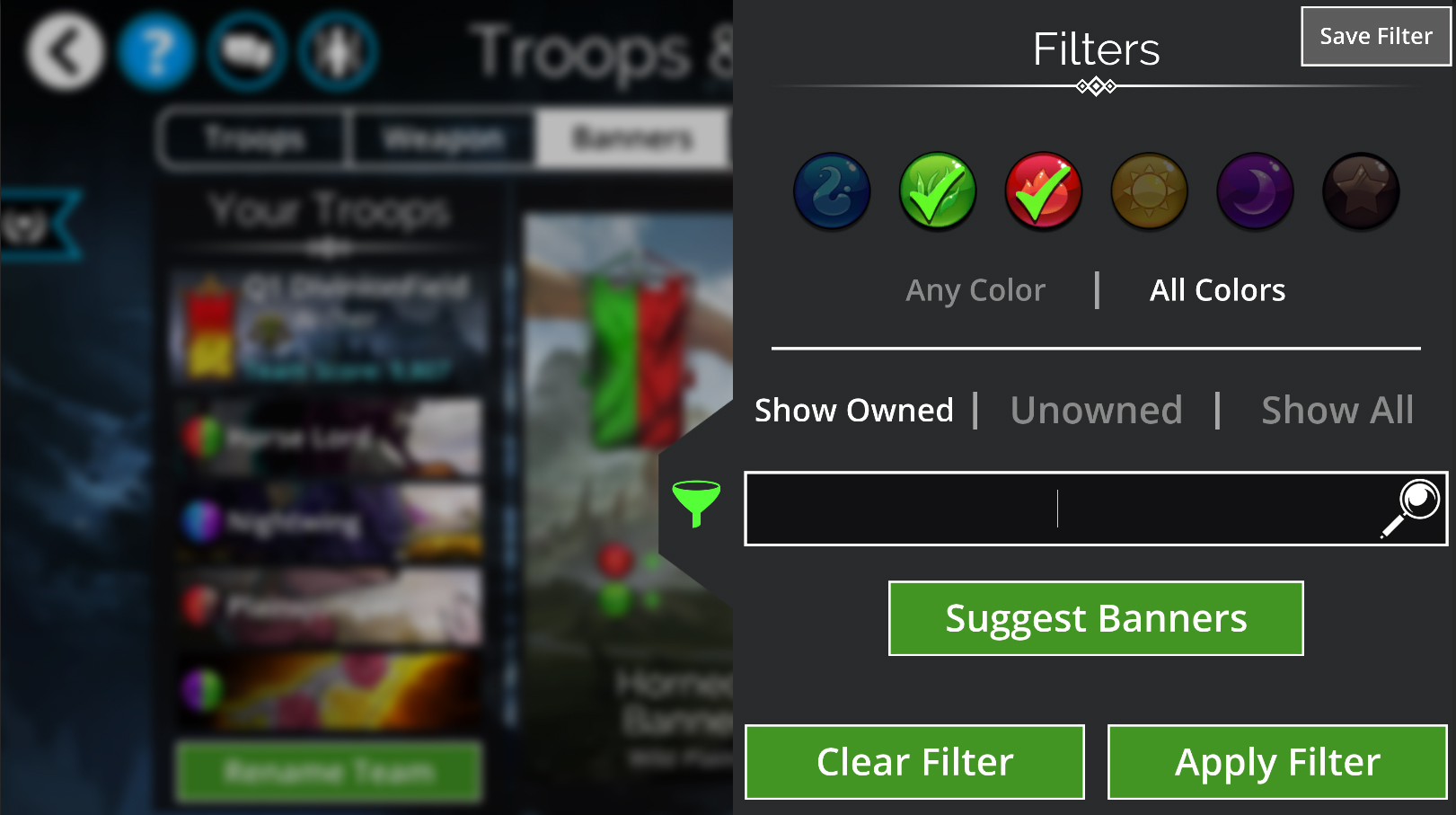 * A filter has been added to the Banners tab on the Troop Collection menu. You can filter by positive or negative mana colours (the tick or cross on a mana gem respectively)
* Unowned Banners can now be seen on the Banners tab
* The keyword filter will check either the banner name, or the kingdom name
* A “Suggest a Banner” button has also been added to look at the current team and automatically apply a filter based on the colours present in that team 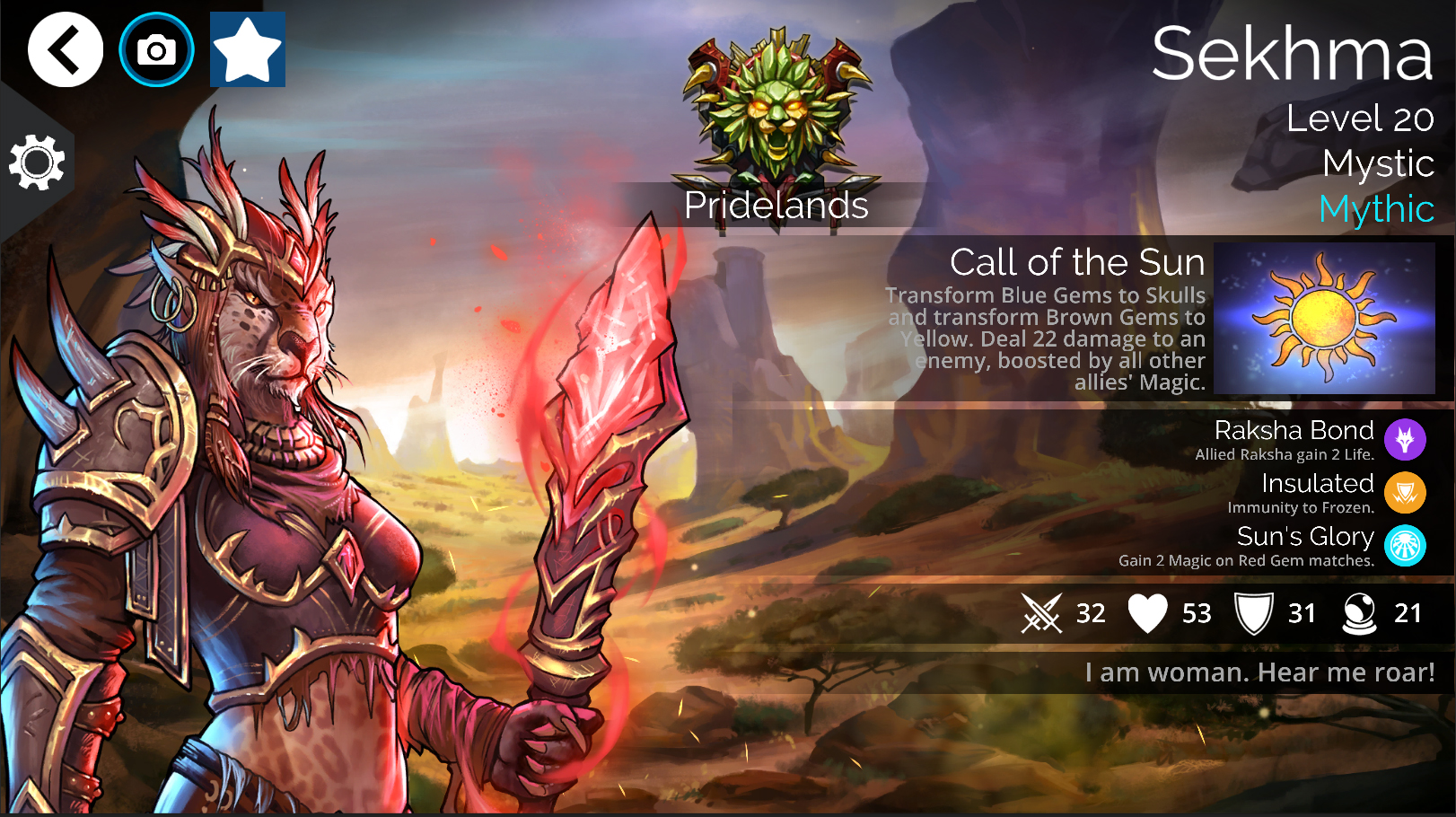 * Troops, Weapons, Hero Classes and Pets can now be displayed in a photo friendly manner
* Background, Particles and Information can all be edited to allow for players to customize the screenshot to their liking
* Screenshots can be saved and shared easily for the different platforms
* iOS and Android devices provide links to upload these screenshots to Social Media or other apps installed on their device

We have 3 new Achievements for consoles and Google Play: * It’s been an Honor – Give Honor for the first time * Real Housewives of Krystara – Get a total of 100 Social Items (Emoji Packs, Portraits, Titles) * The Real MVP – Receive the highest-level MVP award

Splash Damage
Minor splash damage which would deal damage to an enemy and 1 damage to adjacent Enemies, has been renamed to light splash damage, and now deals 25% of the spell’s damage to adjacent Enemies. The following troops and weapons have been affected by this change: * Druid
* Giant’s Mace
* Goblin Rocket
* Mace of Malice
* Nature’s Wrath
* Priest’s Hammer
* Rending Affix
* Rhynax
* Siege Tower
* The Stonehammer
* Watcher

Stonehammer
* Gems created increased from 15 to 22

Cobra’s Curse
We’ve made changes to Cobra’s Curse so it will create Gems that benefit a wider range of Naga.
* Gem Colors created changed from Red + Purple to Red + Green 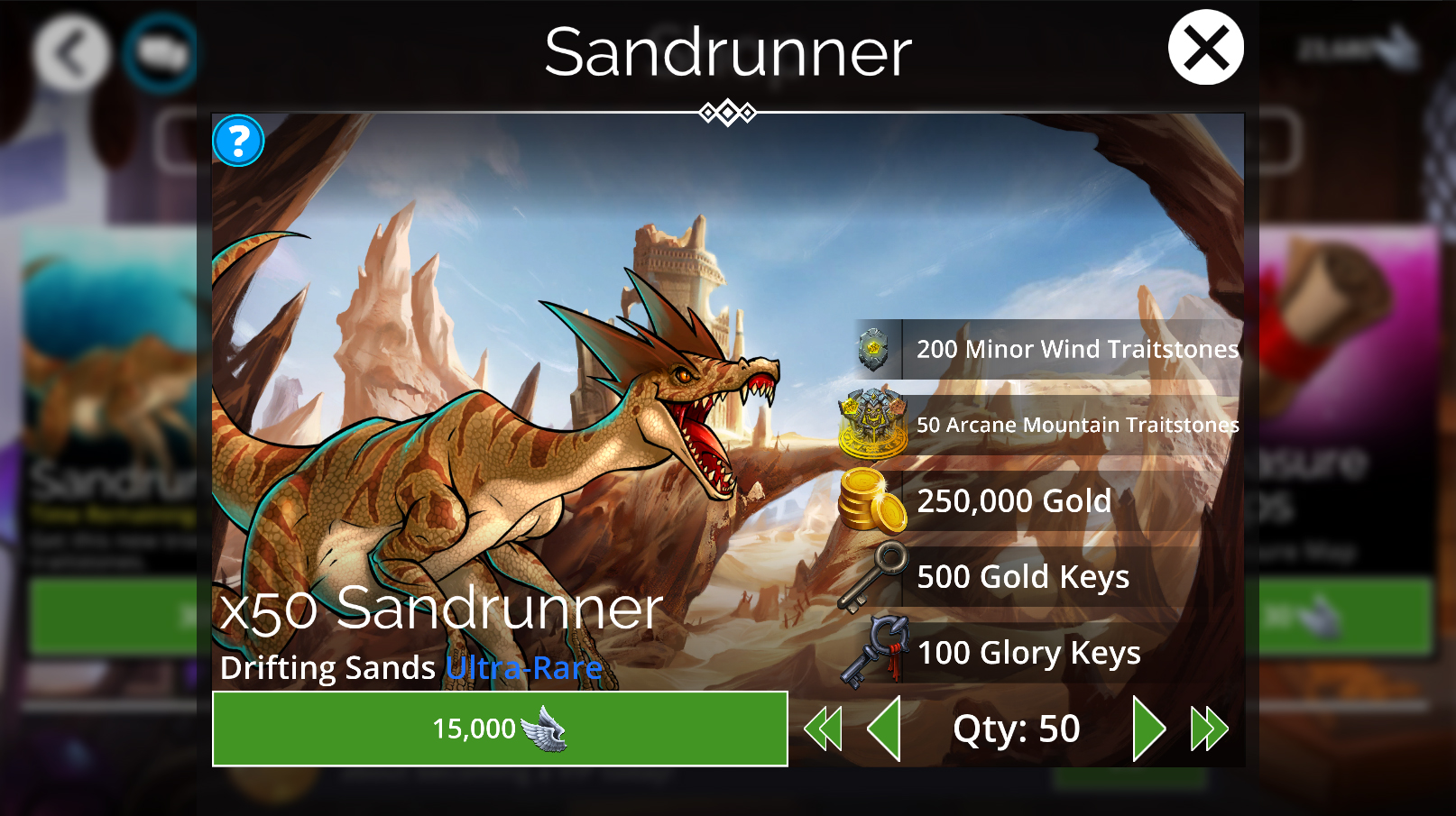 * Troop filtering now allows for players to mark a color to be excluded
* Glory Purchases are now able to be bought in bulk
* Spoils of War glory pack now has a limit of 10 purchases per week. Originally, in its first year or two, Glory was rarer and more valuable, thus we could supply a good value pack like this. Currently though, as Glory can be earnt in such large quantities, we’re having to limit this pack to its original intended amount.
* Event Chests have had a visual update to better display possible rewards from Event Chests, including the weekly kingdom’s name
* Event Chests will now have a chance to drop multiples of Common and Rare troops from that kingdom. Chances for Epics, Legendaries & Mythics have not been nerfed, in fact they’ve been improved slightly… but you will now gain less Ultra-Rares, and instead receive multiple copies of Rares & Commons instead
* We have improved some of the opening animations throughout the game
* Gnomes and Battlecrasher troops now have an animation at the start of battle to show players that they are part of the battle
* Submerged troops now display 0 damage when dodging AOE damage
* Guild Wars will no longer display names of the opponent Guilds, until the day of the battle
* Improved tutorials, so players now receive resources to spend in upgrading troop tutorials
* Players no longer need to have a team selected in order to view hero classes
* Tower of Doom will now give out Fireball + Heroism scrolls consistently across all guilds * Updated the Team Power algorithm

We’ve updated and added in new articles on our Help center for the 4.3 Update: