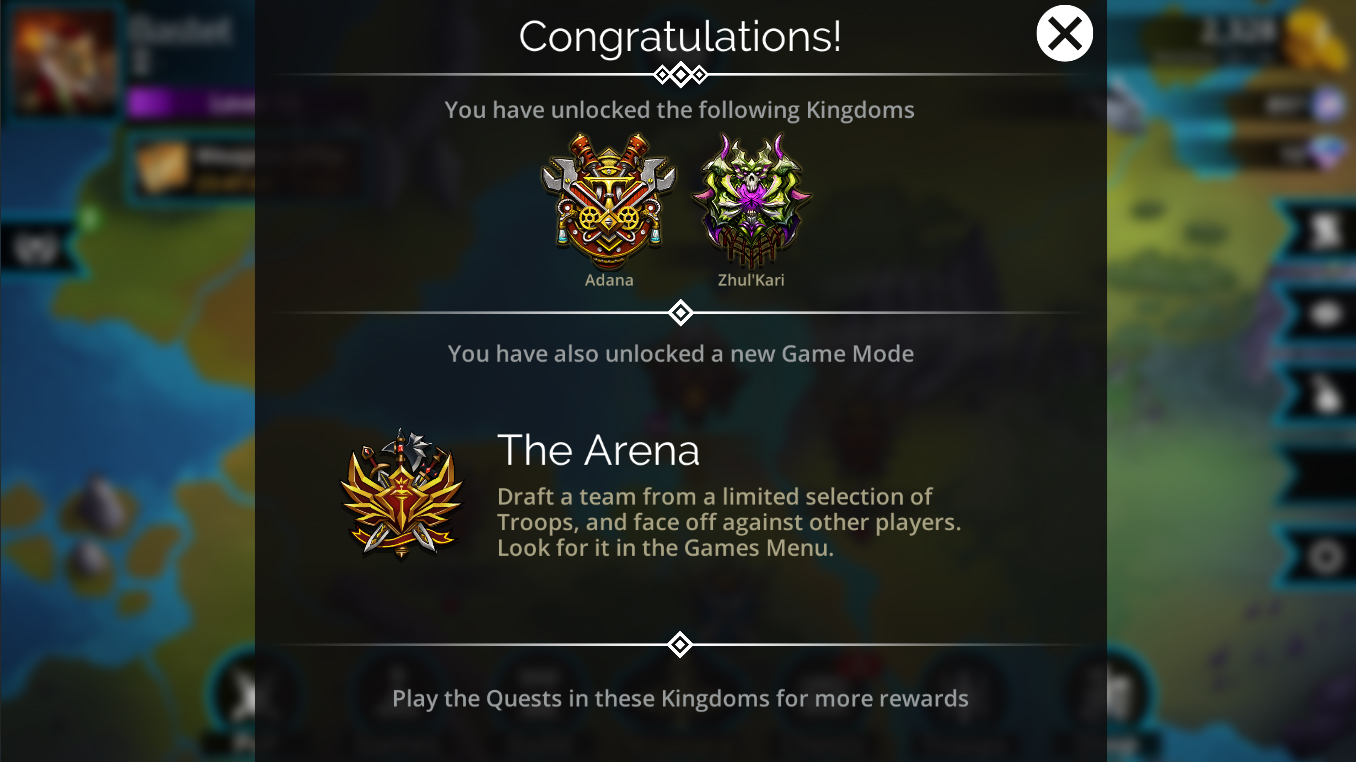 Previously Kingdoms would unlock by level which had several unfortunate side effects for new players. To address these issues, we have changed how Kingdom Progress works.

* Rather than becoming available when your Hero reaches a certain level, Kingdoms will now unlock in small groups whose main quest lines must be completed before the next group unlocks. * The gold cost for unlocking a Kingdom has not changed significantly from the previous version. Adana now only costs 50 Gold. * As mentioned, Kingdoms will become available to unlock in groups. Completing the quest line of all Kingdoms in a group will unlock the next group and give a reward. * Any players who have already unlocked all the Kingdoms will not be affected by this change (i.e. they will not have to unlock Kingdoms a second time). * After updating, Players who have already unlocked all Kingdoms or completed quest lines will receive Kingdom group rewards based on their completed quest lines via the in-game mail. * Mini Games will now unlock as part of the reward for completing a Kingdom group. (This includes Dungeons and Soulforge, whose unlock quests have been removed). * Quest difficulty will now scale with the Kingdom Group. * Players will be able to see Kingdoms from the next Kingdom group. Tapping on them will display a new popup explaining what quest lines need to be completed before that kingdom is available to be unlocked. * As part of this change, the “Gorgotha Unleashed Event” quest chain will be removed from Khaziel.

If you want to read about how this affects new/early game players further, we have put together a game guide that explains how kingdoms will unlock in greater depth here: https://gemsofwar.zendesk.com/hc/en-us/articles/360001119975.

* Early game Tutorials have been updated to reflect these changes in Kingdom progress. * The Kingdom Groups and their completion rewards are below: 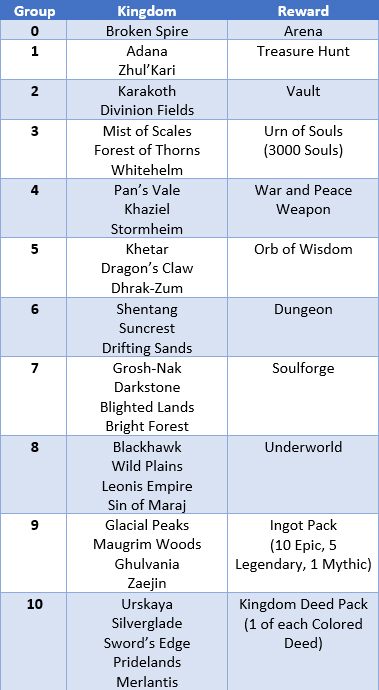 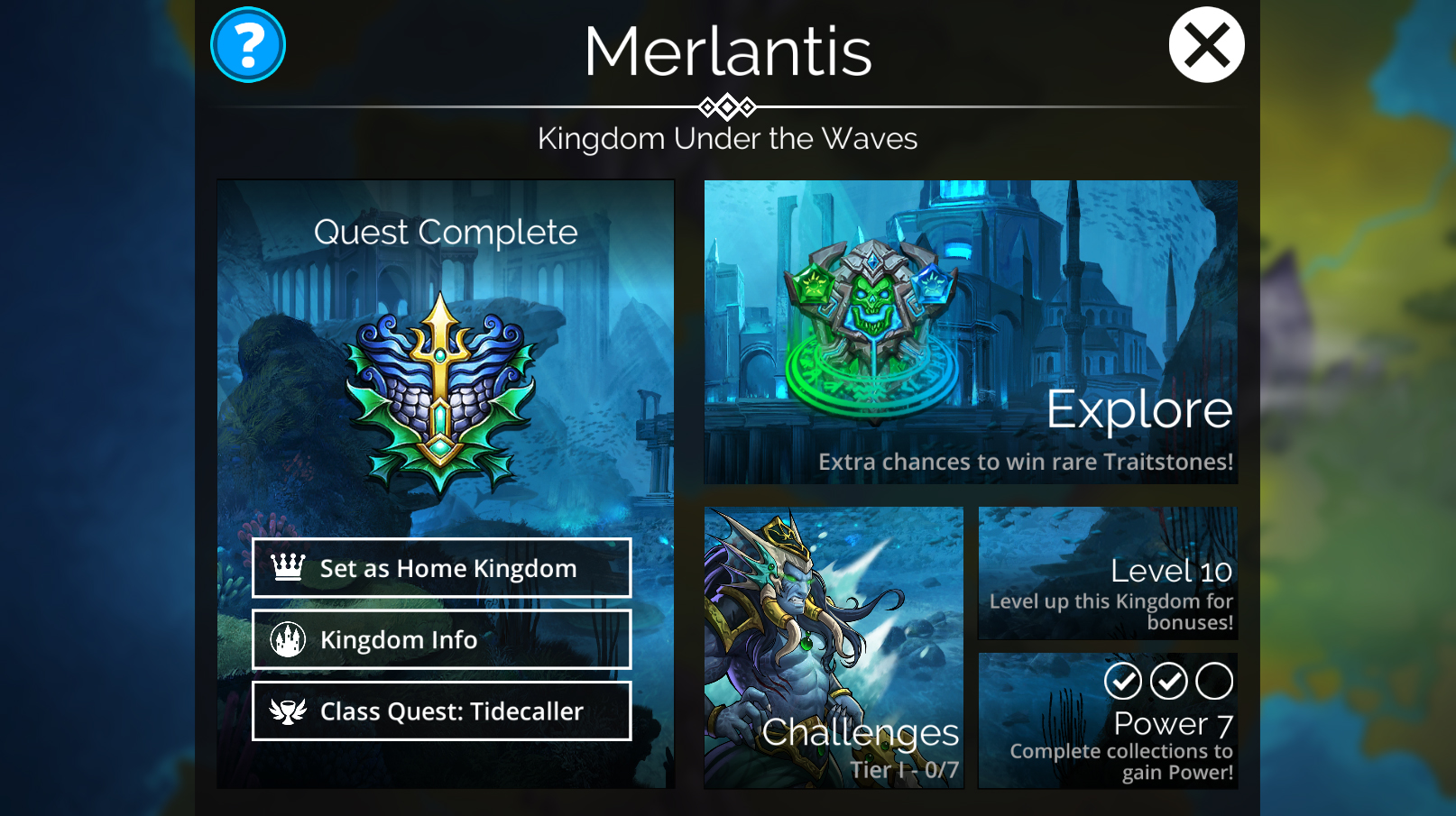 When selecting a Kingdom, players will notice that the menu has undergone a few changes that will make managing Kingdoms easier.

* The Kingdom Popup Menu has surfaced several items that were previously only accessible from the Kingdom menu, including:

* The options of Set Home Kingdom, Kingdom Info, and Class Quests are not available until Players complete the Kingdom’s quest line. This means that quest lines need to be completed before players can set a Kingdom as their Home Kingdom. * We have removed the gold cost for changing Home Kingdom. * Home Kingdoms will gain a special border around the Quest area to show that this Kingdom is the Home Kingdom (as well as the regular visual change on the world map). The ‘Set Home Kingdom’ button will also disappear if a kingdom is already set as the Home Kingdom. * Instead of the Kingdom Class Quest starting after completing the quest line, we have separated it out (to ensure the end of a quest line is clear to player). If a Class Quest is available, Players can now tap the Class Quest button on the Kingdom Popup menu and be taken straight to the class quest. * Tapping on Kingdom Level button will take players to the Kingdom leveling menu (more on the changes there further down). * Tapping on the Kingdom Power button will bring up the current tasks require to earn the next level of Kingdom Power, as well as being able to view the Kingdom Bonuses. * The Challenge Button has been updated to match the changes to Challenges (more on that further down too). 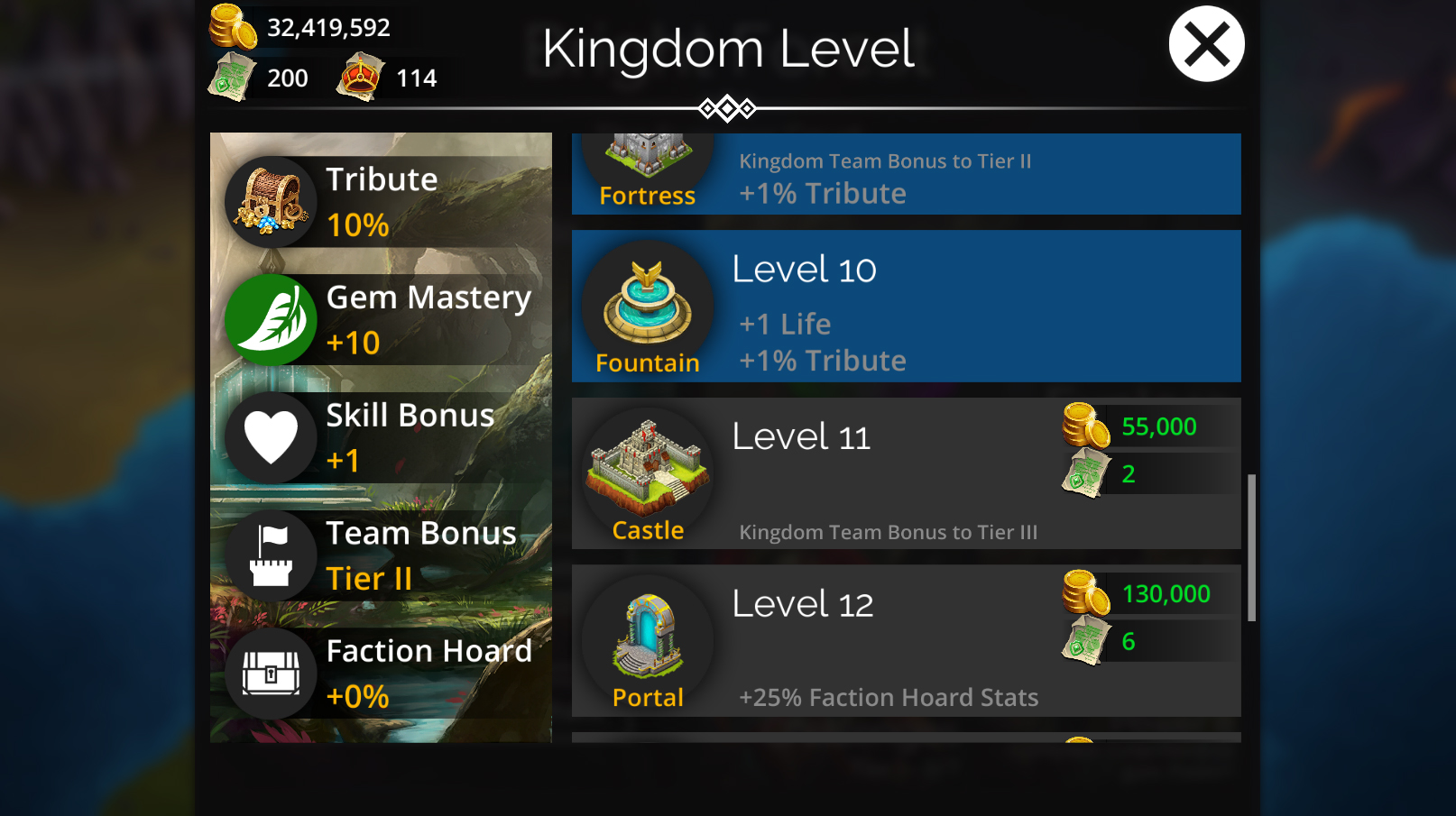 * Kingdom Leveling has had an upgrade to improve rewards given to players at each level. * Kingdoms can now be leveled to 15, and for thematic purposes, each level now has a building name related to the bonus it gives (to give more of a sense of upgrading a castle). * Kingdoms will continue to need gold for leveling, but will also require a new resource called Deeds to go beyond level 10. * Tribute and Gem Mastery rewards will be the same as they previously were. However, they will not increase after Kingdom Level 10. * There are 7 types of Deeds, 1 for each color and the Imperial Deed. * Kingdoms will use Deeds that match the color of the Gem Mastery they give, but all will need Imperial Deeds to reach the final levels. * Deeds can be found from the Adventure Board or in Flash Offers. 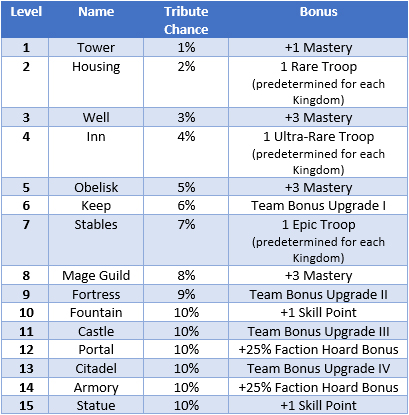 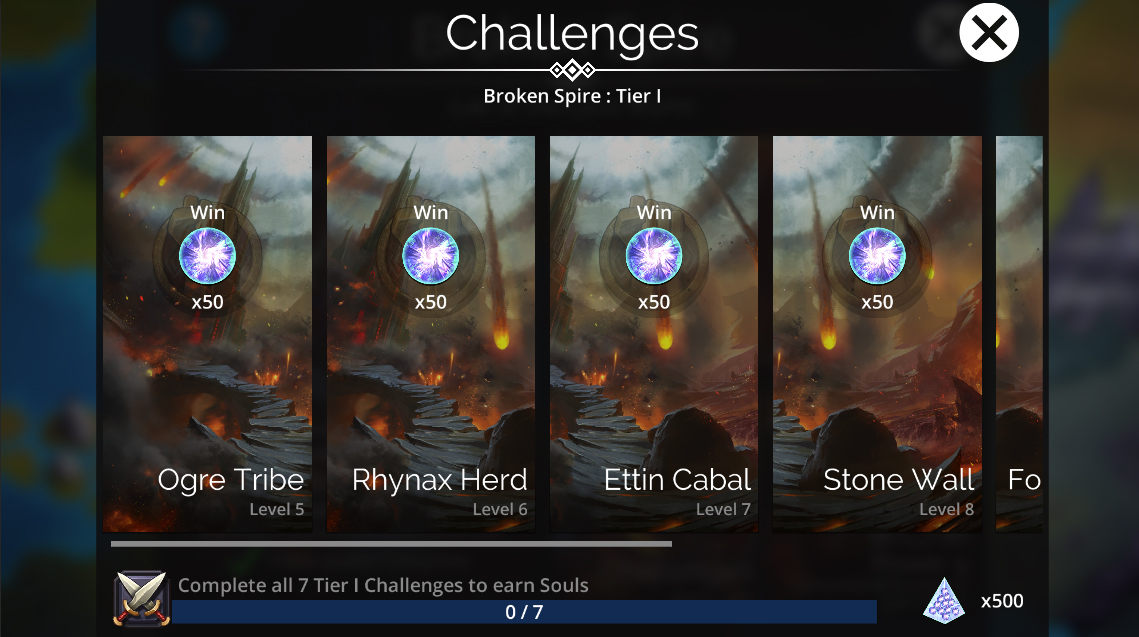 We are changing Challenges to actually be… CHALLENGES (with worthwhile rewards). * Challenges are now split into 10 Tiers, each Tier getting progressively harder. * Tiers must be played in order from Tier 1 – 10. * Each Challenge in a Tier must be completed before players unlock the next Tier. * Each Challenge in a Tier will gain 1 level from the previous Challenge. * Each Challenge only needs to be played once to complete a Tier (so 7 battles completes a Tier). * Players who have 5-starred ALL their Challenges in a Kingdom will start at Tier 2 for that Kingdom. * Players who have NOT 5-starred ALL their Challenges start at Tier 1 with any 5-starred Challenges marked as complete. * Each Tier will give a reward for both completing an individual Challenge and for finishing the entire Tier. * Challenge battles are not replayable once completed, and will only give their reward once. * Once a player completes Tier 10, they will no longer be able to play Challenges in that Kingdom. * Some Challenge battles have changed what troops are in them, to better reflect newer troops that have been released, or to balance the difficulty for when players encounter it (e.g. Gob-Chomper was a little too tough for newbies in the first Broken Spire Challenge). * Challenge battles will give 2 Champion XP to the Class of any Hero playing them (up from 1 Champion XP in the previous system). * The Challenge Menu has been updated to reflect these Challenge changes. * The Challenge Rewards for battles and Tier can be found below:

The Difficulty system is in the middle of a rework which players will notice over the next couple of Updates. In this update, you will notice: * Quest Battles now have auto-scaling, based on the Kingdom Group in which they unlock (see Kingdom Progress for the Group List). * Challenge Battles have a new mechanic that unlocks harder versions, but they also have more appropriate & more useful rewards for the levels at which players complete them.

We have a new Status Effect – Reflect. After a troop takes damage, Reflect will take 50% of that damage (from Skulls, Spell, and Traits) and reflect it back to the Enemy who caused it. Reflect will dispel once damage has been taken (so it only activates once). Reflect does not protect its troop from any of the damage taken. Reflect damage is rounded down, however Reflect will always deal a minimum of least 1 damage (even if the damage that triggered it was 1). Reflect damage is counted as special damage, so damage reduction traits such as Armored or Spell Armor will not apply to the damage dealt by Reflect. Reflect only applies if an Enemy deals damage. Allies dealing damage will not trigger Reflect, nor will Status Effects. Positive Effects and Healing have no interaction with Reflect.

* We have improved the Mail popup when viewing individual Mail received. * The Gnome Vault menu will now display the number of Vault Keys owned in the top right corner of the screen. * The Soulforge will now display the amount you currently own for any resource you can craft. * The Pet Info tab of the Pet Rescue menu will now display how many copies of that Pet you own, and its current level. * Raven Towers have been added to Invasions. They have a chance to replace a Tower instead of a normal Valraven spawning.

* There is a known visual bug that will effect Cat Burglar and Street Thief. When they use their spells, the particle effect that indicates gold has been gained will trigger whether any gold has been taken or not. This is only a visual bug, and you can check the correct amount of gold you have received in-game with the gold counter. We will be fixing this in 4.6. If you want to read about it further, you can do so here: https://gemsofwar.zendesk.com/hc/en-us/articles/360001123575-Visual-issue-on-Troops-that-steal-Gold.