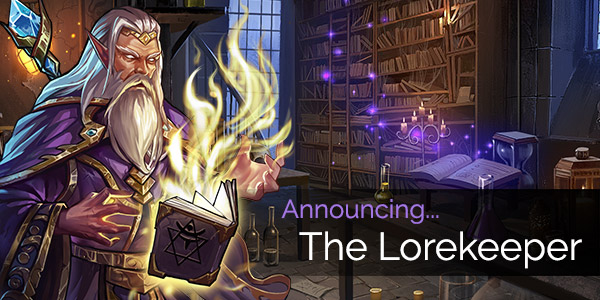 We just wanted to send out a quick notification before tomorrow’s blog about a slight change of format to the posts, and a cool new thing we’re trying out… the Lorekeeper.

Well, the current blogs contain stories & troop release info all bundled together. Different folks like these 2 things to different degrees – probably most people want hard stats/pics of the new troops/weapons, but that doesn’t make the other camp less valid, and we’ve received a lot of feedback recently asking for more lore on the world.

The solution? We think splitting it up so that troop data releases first (same time as always), and then stories release some time later (up to 24 hours later – we’ll probably tinker with this initially).

Now the BONUS here is that we then have a lot more scope for what we do with the stories/lore, and this is where the Lorekeeper idea comes in! The idea behind the Lorekeeper is that we break stories up into 1 chapter per week for 3 months, forming a self-contained novella. Most weeks it will deal with the troops released in some way… sometimes peripherally, sometimes in detail… but at the end of each 3 months, we have a 25,000 word novella that you could download and enjoy as a separate thing (or you can read it episodically every week).

When will you see this?

Tomorrow! Tomorrow’s event blog will release as normal, but without the usual flavor text… and the first chapter of “Lorekeeper I: The Three Dragons” will release about 8 hours later.

Until then, have fun!