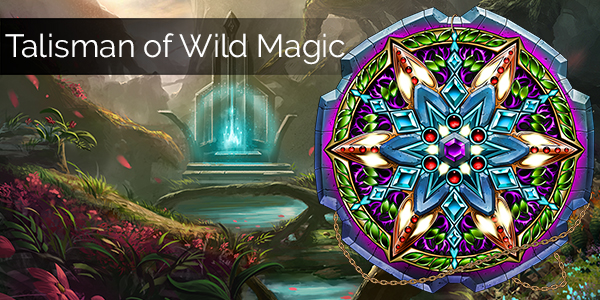 A brand new Campaign begins today. Tassarion has asked us to join him as he investigates a strange new Magic he has discovered

During this Campaign, we have a new Heroic Gem that players may encounter in puzzle battles, the Wildcard Gem.


Wildcard Gems can be matched with any Mana Color to make a Mana Gem Match, and have a multiplier which will apply to the Gem match. This will increase the Mana earned from the match (e.g. Red Gem match that includes a x3 Wildcard will give 9 Mana instead of the normal 3). Gem Matches that include a Wildcard cannot trigger a Mana Surge.

Wildcard Gem multipliers will add together if multiple Wildcard Gems are in the same match (so a Red Gem Match with x2 and x3 Wildcards will be multiplied by x5). Wildcards cannot be matched with Skulls and will not multiply Mana if part of an explosion.

Wildcard Gems will occasionally (but rarely) drop like regular Gems during the Talisman of Wild Magic Campaign. Some Troops and Weapons will also be able to create them.

Once the Campaign is over, they will no longer fall randomly though the Troops and Weapons that create them, will continue to function.

During this Campaign, players can earn Stars to level this Campaign’s Artifact – the Talisman of Wild Magic. Each new level will expand the story of the Campaign and also give Skill Point bonuses to all battles (including PvP and Guild Wars).


When the campaign ends, players can still earn unique rewards in the following ways:

The Tarot card for this Campaign will be The Magician.